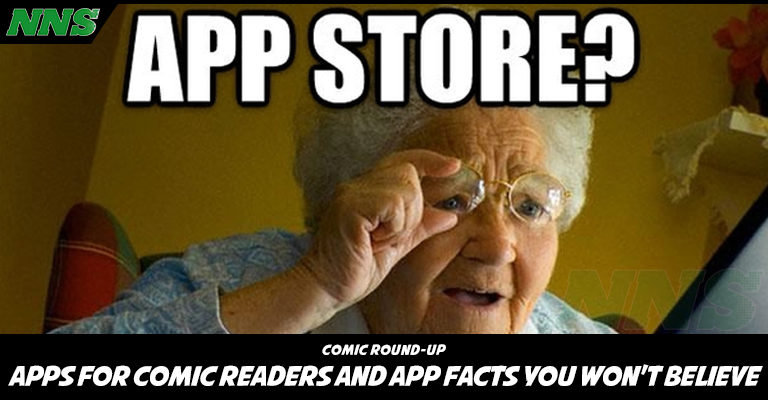 Can you believe that it’s National App Day? That’s right, APPS get their own day! They are obviously a very important. Where would we be without our apps that remind us to pay our bills, to do our daily breathing exercises and steps in, to get to that meeting, and to wipe our own butts? Searching around about Apps, below are a few interesting facts I gathered.

That being said, let’s talk about the apps that we cannot live without. Below are my TOP favorite apps in regards to… COMICS of course!

Find and read more books you’ll love, and keep track of the books you want to read. Be part of the world’s largest community of book lovers.

Read over 75000 comics and over 700 free comics available from publishers such as Marvel, DC, Image, BOOM, IDW, Top Shelf, and Oni Press on your phone, tablet, and computer!

Home to thousands of creator-owned content with amazing, diverse visions from all over the world. Get in on the latest original romance, comedy, action, fantasy, horror, and more from big names and big names to be. Available anywhere, anytime, and always for free.

Offering short stories and comic strips running the full gamut of big name authors to amateur and indie writers in short, mobile friendly formats. Tapas includes both free and premium content, with a system of “coins” and “keys” that you can earn with in-app actions (like watching ads) or buy with real money. You can then use these currencies to unlock gated content.

Chunky supports CBZ, CBR, CBT and PDF comics, and understands ComicRack and ComicBookLover tags. It can browse and download directly from iCloud Drive, Dropbox, Transporter, Google Drive, OneDrive, Amazon Cloud Drive, Box, Pogoplug, Mediafire and Copy, and you can copy files in and out with iTunes on your computer or download them via the built-in web browser.

What are your favorite apps for comics? What apps in general can you not live without? Let us know in the comments!