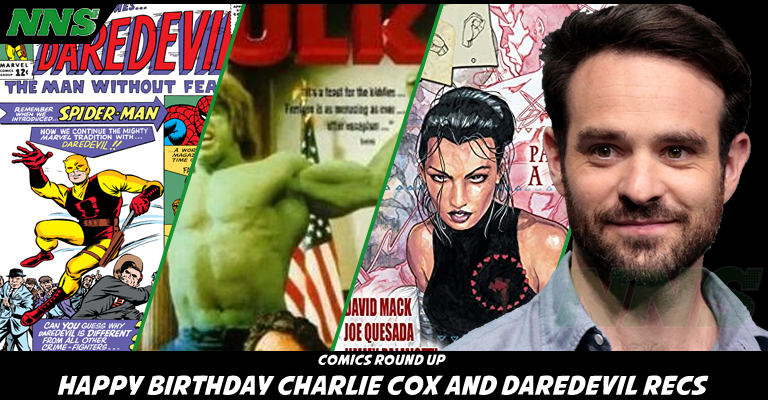 Charlie Cox, born Charlie Thomas Cox on December 15, 1982. He is a British-born citizen, hailing from London. Cox learned acting at the Sherborne School in Dorset. He even received the Gerald Pitman Award for his acting prowess while learning at the academy.

Here are a couple of facts about Charlie Cox in relation to Daredevil:

This is the Comics Round-Up though, so let’s talk about his comic book persona, Daredevil.

Matt Murdock, and his alter-ego Daredevil, was created by Stan Lee, Jack Kirby, and Bill Everett. Unlike a lot of hero’s Daredevil’s first appearance was in his own comic book, not as a special character of a different series. While the character was created in 1964, it was Frank Miller’s helm of the character in the 80s that helped increase its popularity.

At a young age, Matt Murdock was blinded when a mystery chemical blinded him. It was this very same chemical that granted him a radar sense that allows him to make up for his loss of vision. His tragedy is made worse though when his father is murdered for refusing to throw a fight.

Left with a lot to process Matt, an orphan, is trained by a fellow blind man, Stick, to become a skilled martial artist. However, as he gets older, he turned to a love of law and became an attorney for those in need.

He returns home to Hell’s Kitchen and begins to target the local gangsters who were responsible for the death of his father.

Here are a couple of influential comics to pick up if you want to learn more about the man with no fear!

What other Daredevil comics and formats are you a fan of, and what project coming out in the MCU do you think Charlie Cox would be perfect for?>/strong>