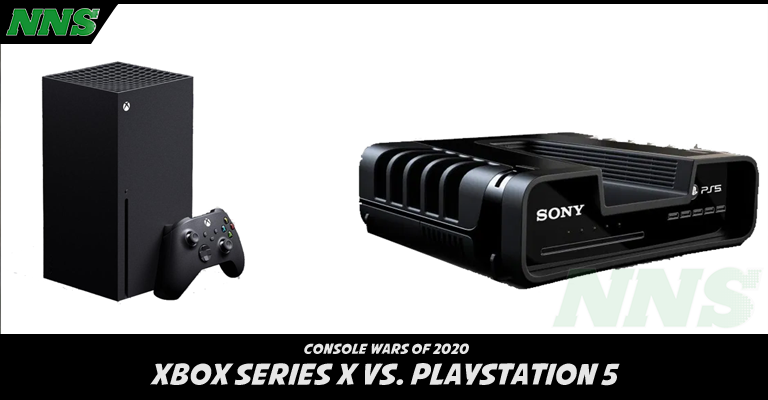 We listed this post as the 2020 Edition, but the belief that there may be a more consoles after this one might be a bit far fetched.

Sorry Sony, the PS9 may never be a reality.

We’ll get into why near the end of this post, but first, lets talk about the consoles.

Specs And Stats For The Nerds!

While not all the information has been fully confirmed, and we have some holes, but we do have the basic stats, and it’s enough to showcase the differences. 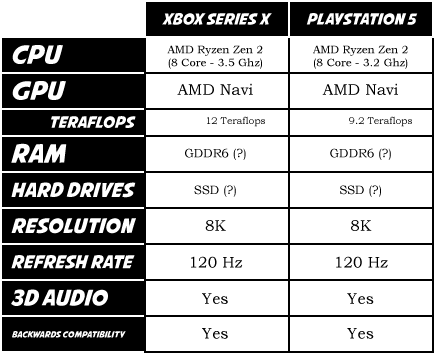 CPU:
It’s identical in almost all ways, but unless Microsoft is lying they are able to get a whole 0.3 Ghz over the PS5. That being said, if the same games are released, would the 0.3 Ghz really help? YES! YES IT WILL!

GPU:
Not a lot of information has come out exactly about the model of the GPU, but that it’s AMD’s Navi. However upon testing in it’s configuration the Series X is able to pull 12 Teraflops while the PS5 is only able to pull out 9.2 Teraflops.

9.2 Teraflops is more then enough for 4K or 8K gaming with life raytracing. But the difference is staggering. It’s perplexing and it makes me think that Microsoft may once again be beating their chest, and lying, but if it’s true, they have the more powerful console two stats in a row!

Ram:
Unfortunately we don’t know what amounts of ram the consoles will hold, as both have kept the information close to the chest. However, it is clear what type of Ram they will be using.

The next gen consoles will be upgrading to the GDDR6 ram, and in doing so will preserve power consumption dropping the general consumption from 1.5 volts to 1.3 volts. Additionally GDDR6 will almost double the speed of the prior GDDR5 ram, reaching 16 Gigabytes per second (not including the higher end GDDR5X which maxed out at 12 Gigabytes per second).

Hard Drives:
Another main feature of the consoles is that they are now opting for a SSD hard drive as opposed to the prior HDD which while able to allow larger storage size, was sensitive and slower.

With the newer model solid state hard drives, the systems will be much faster for all of it’s more high end processes.

Resolution and Refresh Rate:
Both consoles are prepared for people’s TV upgrades, as both the Xbox and the Playstation will allow for 8k output. The crazy thing however is that both consoles will be able to push out 120 Hz refresh rate, since most TVs only can receive 60Hz natively, and then upscales afterward.

New Features Coming To The Future Of Consoles

A big hit this year, is the push toward 3D audio, more commonly known as Dolby Atmos. As more sound systems, sound bars, and companies decide to use the awesome and impressive technology, Sony could no longer deny it’s staying power.

Microsoft however always knew it was a thing of the future, and allowed for not only pass-through to receivers, but generation through gameplay.

They had it running on Overwatch on the Xbox One X.

The other major point of talk is the backwards compatibility that becoming a huge talking point. If you have a bunch of games, you don’t want that to be a point to fight purchasing your console. Not a lot of people want multiple devices plugged into their TV. Additionally, if it’s a gamer house, they likely will already have a Playstation, Xbox, Switch, and other peripheral devices, now you want them to have two of your consoles?

So the industry finally understands the desire of the market, and they aren’t fighting back. But it raises the question when you look at Microsoft’s strategy.

Microsoft Doesn’t Care If You Upgrade To The Series X

Well, I mean not that they don’t care, but that it’s not their priority. They see the writing on the wall. Game consoles won’t last forever, and as such, Microsoft has shifted a lot of their focus from console to services. Gold and Game Pass are a big talking point for them. Hell they are throwing top tier games at users to get more people to sign up.

They aren’t laying down in the console war, they know people will want the next best game, and that if they mess that up, they’ll have a dark time. Remember the first year of the Xbox One?

It’s an interesting concept, and for that reason Microsoft will be making a bunch of their games playable on the Series X and the One X, without needing to buy a different version. It’s a bold and crazy move, but it might actually help to take the steam out of the console upgrade wars. Additionally it shows gamers that Microsoft is planning on supporting their consoles outside the window they prior promised.

Is It Worth Upgrading Your Xbox One X?

So if you were an early adopter, of the Xbox One X, should you upgrade your console? 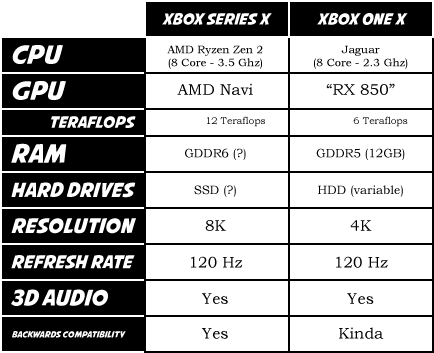 I mean, I wont break into as much as with the prior section, but the Series X is a better console, there is no question. That being said, it depends on what you are doing. With 6 Teraflops of power, and a 2.3 Ghz CPU, the console can take care of your 4K needs. However they will likely never unlock 8K. The Xbox One could handle 4K, but they never unlocked it, (of course there were also port issues for the HMDI, but they never upgraded the ports anyway when they could have).

The big thing for me is the backwards compatibility. They always boast, with the 360 and the One that they will add backwards compatibility, but it’s released slowly and sub par to what the market thinks they are going. If the Series X goes all the way back to the Original with the full catalog, and no slow releases, then I am sold on upgrading.

Who Wins In This Console War?

Well I may be biased (but we have trash talked Microsoft before with the all digital console) but it appears the winners of this generation are not Sony or Microsoft, but the owners of the Xbox One X. Congrats on making the right choice.

Do you agree? Do you disagree? Share in the comments why!