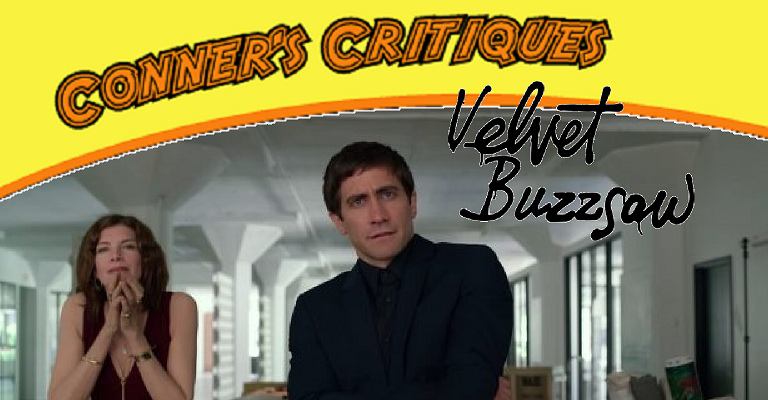 Hello and welcome to Conner’s Critiques. My name is Conner Sharp and today we are going to be talking about another item from the Netflix line-up. Eventually we will move onto other providers, but for now Netflix it is!

We are taking in and appreciating (or not) the artistic vision of Velvet Buzzsaw. So grab a glass of champagne and peruse the gallery of my words in this critique.

STORY: 3/10
I first have to start by saying that I take no pleasure in this. I was really excited about this movie when I first heard about it. It felt very unique, and sounded like it would be right up my alley. What I got was nothing short of tragic.

The thing to start off with, is that the story here in theory is amazing and very interesting. However, the movie fails in practice, not by any fault of the actors either.

The major fault in the piece has to primarily do with the fact that they have so many great and intrinsically interesting characters, that it becomes difficult to tell all of the characters stories. What they did to resolve this issue was to skip through time, jumping forward days, and weeks without showcasing that the time had even passed.

This leaves people lacking as to what has happened in the story. An event that happened less then ten minutes prior, now specifically happened over a month or two prior. A character is falling in status, and it’s not covered. I mean that’s a story I’d be interested, because it gives depth.

However, without showcasing it, or even clarity that time had passed, it just feels awkward and the audience is confused.

ACTING: 9/10
As I said earlier, the acting is top notch. Everyone gives a believable, and solid performance. They act the hell out of their characters, and are charming, and hate-able, and everywhere they need to be. No one felt specifically pigeon holed, or forced into a box. Everything with regards to the actors and the characters is amazing. I just wish they were either given more time to shine, or characters were cut to allow the main ones to flourish more.

I mean, to be honest, the whole film would have been much better if they director had another hour to convey all the story that was unnecessarily chopped from the tale. However, it’s the directors job to realize he can’t and adjust accordingly to “Direct” a good film.

The actor portion of this review will not suffer for the failing of the director/writer though.

OVERALL: 4/10
The acting was amazing, and I loved the cast, I mean Jake Gyllenhaal was literally electric as Morf. However, when all is said and done, bad direction and vision can ruin even the best acting.

It’s interesting to see Horror being used with the concept of high art, but as a result of the horrible vision and formatting of the movie, it was wasted, as well as the cast’s amazing acting, in this film.

Conner’s Final Thought(s):
I’d probably stick clear of this horror film if you are looking for a solid movie. However, if you’d love to see some amazing acting, and are willing to put up with a frustrating story, then feel free to watch this film.