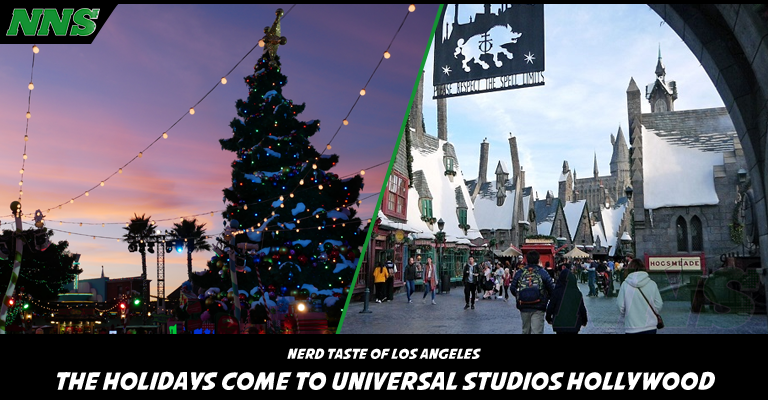 Universal Studios has decked the halls with boughs of holly and fa-la-la-la-la’d into a big cup of jolliness with two events this year: Grinchmas, and Christmas in the Wizarding World of Harry Potter. In this article, I’ll be going over the amazing show at Hogwarts Castle and the Whobilation in Whotown!

Christmas in the Wizarding World of Harry Potter

With Hanukkah, Christmas, Yule, and other winter holidays right around the corner, spending time with people you love in a place that embodies both joy and nerdiness is probably at the top of your list of things to do. Consider heading to Universal Studios Hollywood, where you can experience the Wizarding World of Harry Potter: Super Funtime Ultimate Christmas Edition! 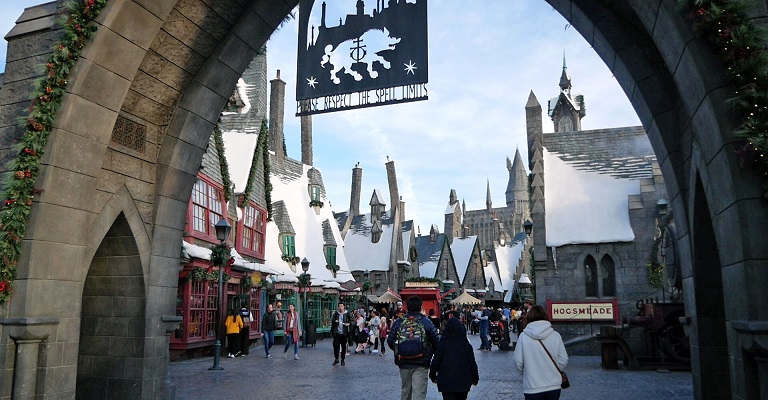 Hogwarts has its fair share of spirits, but did you know that one of them is the Holiday Spirit? I know, that was awful and I feel bad for saying it. Joking aside, just around the corner from Whoville, near the center of the park, is the Wizarding World of Harry Potter. This time of year, you’ll find that it’s halls are all decked out with snow and wonder for the season. The denizens of Hogsmeade are all enjoying the magic of winter, snow decorating their rooftops, and Hogwarts Castle off in the distance is blanketed in white powder. 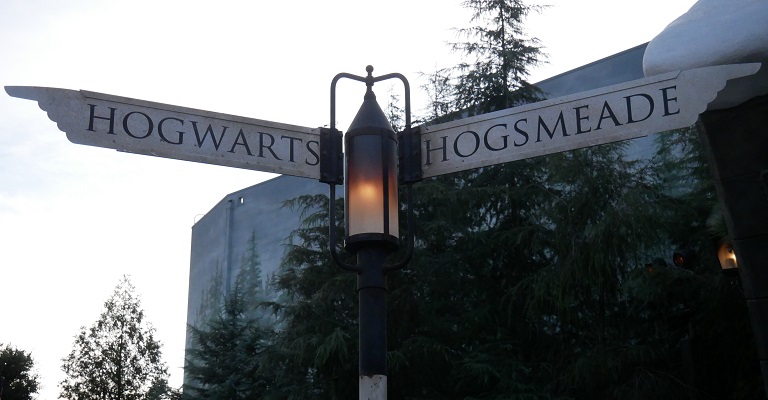 If you visited Ollivander’s wand shop and found your wand, you can interact with each of the shop fronts. A quick wave will allow you to activate a window display. Stirring a cauldron, moving tea cups, or causing dolls to dance, you’ll feel like a real wizard or witch in the mythical school as you traipse about the town and cause Weasley-level trouble.

The Leaky Cauldron, a pub you may be familiar with in The Prisoner of Azkaban, offers an array of traditional British cuisine. You’ll find bangers and mash, which consists of sausages and mashed potatoes, a dish reminiscent of a seafood-themed shepherd’s pie called Fisherman’s Pie, and a snacky favorite of mine: the ploughman’s platter. The ploughman’s platter consists of an assortment of breads, cheeses, a bit of greens, apple beet salad, a couple types of pickles, and some scotch eggs. There’s much more available on the menu here, ranging from the incredibly British to the tolerably less British if you’re not so much into that stuff, and if you’re really in a pinch because you’re a picky one, just get a macaroni and cheese from the kid’s menu, because you’re twelve. 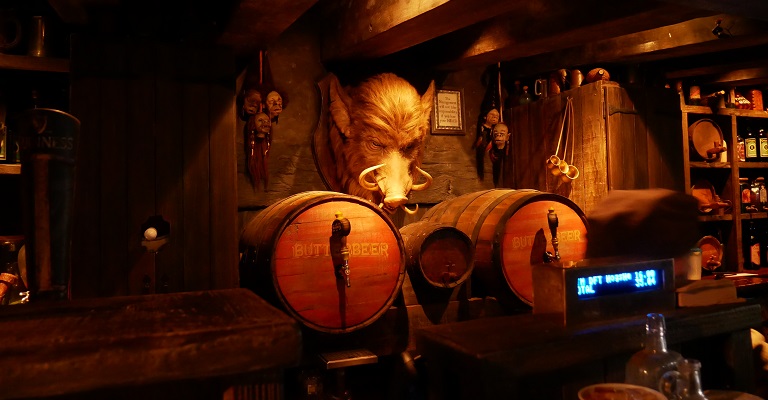 One of the most spectacular events happens a little before the park closes and is reminiscent of Disneyland’s fireworks show, but with less air pollution, fire danger, and trauma to the local wildlife. I’m talking about the insane production of 3D projections. The wizards and witches of Hogwarts decorate the school with lights and trees and snowmen, dancing in accompaniment to an enchanting orchestration and climaxing with some light fireworks. It really is a sight to behold, completing the experience of your involvement in the world of Harry Potter, and making you forget that you’re a dirty muggle. 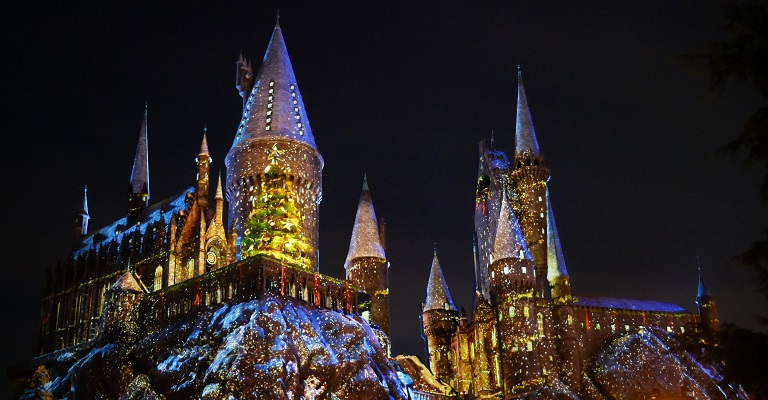 It’s that season again. A season that fills most of the world with cheer, and leaves the remaining Whos in Whoville up on Mount Crumpet with the Grinch. As a person who suffers from having a heart three sizes too small, I fall directly into the category of a pre-haunted Scrooge. Coming from that perspective, imaging how amazing the Grinchmas event must have been to have me singing along!

Fah who for-aze and dah who dor-aze right on over to the center of Universal Studios in Hollywood, California to experience your childhood come to life with Grinchmas in Whoville. As you walk in, you’ll see the sights and sounds of the bustling town, complete with shops, character actors and interactive props, all decorated to welcome Christmas Day.

Take a family picture with a Grinchy snowman or in front of any of the hundreds of cool decorations in the area. The tree is gigantic and beautiful, even during the day. You can also grab a selfie with a few of the many character actors floating around the town, like Mayor Maywho, Martha May Whovier, or little Cindy Lou Who! 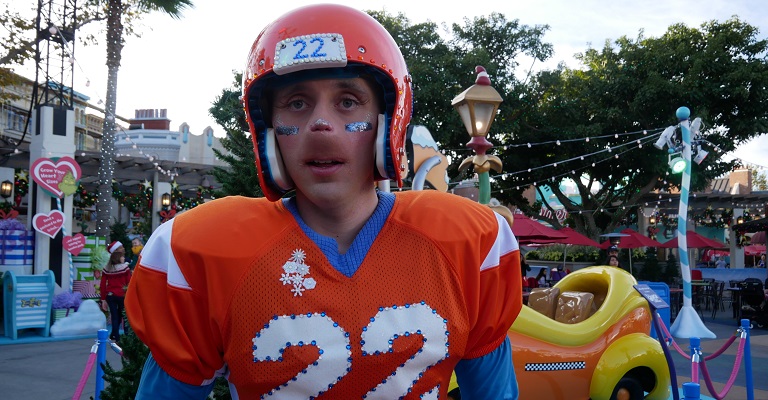 Among the festivities during the day time, you’ll have a chance to meet and pet a real life Max, and not too far from him is a large truck surrounded by trees and huge gifts wrapped in the finest paper, where you can meet the Holiday Cheermeister, himself: The Grinch. 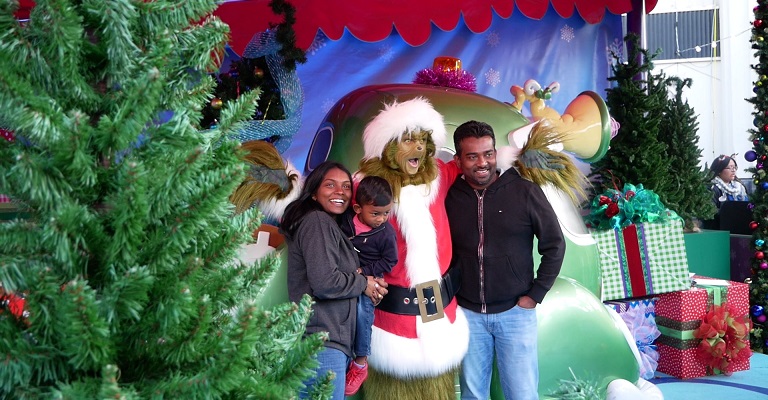 As the sun sets and the holiday lights brighten the park, Whoville becomes a little more lively with a stage performance and the lighting of the enormous Grinchmas tree! When we visited, the park set up the lovable Mario Lopez to make an appearance, reading the tale of The Grinch Who Stole Christmas, and is soon joined on stage by the Grinch, himself! Caught in the act of stealing Christmas decorations, the play continues where Mario left off. Cindy Lou Who is kind to the Grinch at every turn, eventually filling him with enough holiday cheer to grow his heart beyond that of the normal Who, gain the affections of Martha May, and the friendship/tolerance of Mayor Maywho as he takes on the role of Holiday Cheermeister and lights up the tree.

It was a beautiful performance. The character actors are not only engaging and fully committed to the role, but I truly believe that they love everything about what they’re doing. For a child, that’s the most important part. It allows them to truly invest in the holiday and seeing all the wee ones interact with the Whos was heart warming. 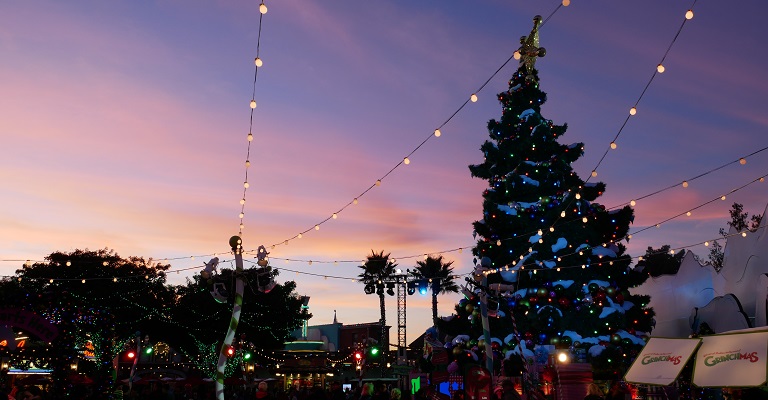 Grinchmas hit me right in the feels by bringing one of the very few things I enjoy about the season to life, and doing it the right way. All my disdain for the holiday melted away for a few hours, and I was filled with wonderment and joy for the little things. The lights twinkled just right, the sunset was more magical than usual, and I could swear that I believed in Santa for a moment there. I typically avoid amusement parks at this time of year, but I can see myself going back to this every weekend.

Buying your tickets online in advance is a smart option, since tickets at the gate are typically more expensive, and lines aren’t fun to sit in!

See you at the park this season!