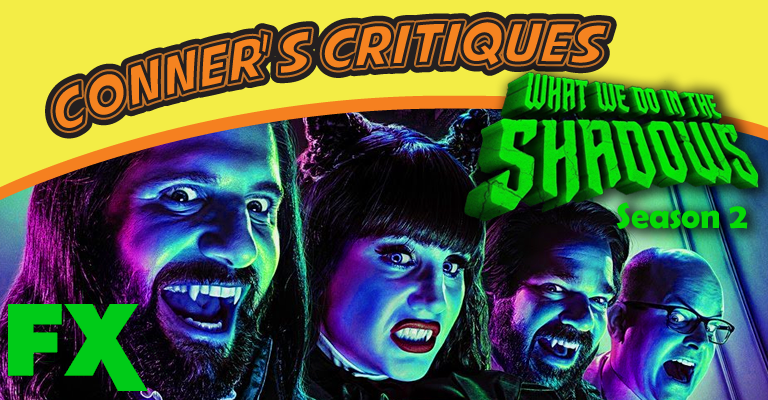 The second season of What We Do In The Shadows has come to an end, and if you were wondering how they would not only continue after the bombastic conclusion of the first season, or even keep up the steam from such an amazing conclusion, then you will be happy to know that they did just that! Lets not waste any more time though as we delve into this review, with full heart, pumping blood, and tons of Spoilers.

As always we bleed this critique with the three categories: Story, Acting, and Overall.

STORY: 7/10
As far as stories go, the show shouldn’t be judged to hard in this category, because it is a light hearted comedy with blood a plenty. However the show didn’t pull any punches into increasing the lore of the world.

They start off quickly, delving deeper into Guillermo, played by Harvey Guillén, living into his potential genetic pre-disposition of being a descendent of Van Helsing. Then they take you into a world of necromancy and zombies. That’s right Zombies exist in their world now. They keep moving further in the season though showing how much ghosts and witches play into the lore and history of the main characters.

The show pushes the crazy world even further as it showcases the extent of Colin Robinson’s powers.

While the show doesn’t have groundbreaking stories, and dialog of high wit, it still does an amazing job being fun, and right now that is highly needed.

ACTING: 9/10
The heaviest hitter of this season is once again Harvey Guillén, who shows the skill of Guillermo, who we consider the sleeper main character of te series. His journey into self understanding takes him on a unique tale, with him joining a band of vampire hunters, while also keeping his own vampire coven safe from vampire assassins sent by the Vampiric Council. As his character finds his place in the coven, he still struggles to gain respect in vampire household.

Another amazing story point in this awesome season was that of the background on Mark Proksch’s Colin Robinson. While the prior seasons journey into his relationship with Evie Russel, played by Vanessa Bayer, was a delightful journey, and introductory course into his abilities, “Colin’s Promotion” was a darker tale. Within the story, we see the extent of Robinson’s abilities if he is left to gain power unchecked. While it is dark, it still keeps humor throughout his head swelling with power.

OVERALL: 8/10
So the question that was broached earlier was how would they live up to the expectations of the first season finale, we need look no further then the season two finale. While the season on it’s own stands and continues the strong following the conclusion of the first season, the tradition lives on as they deliver an action packed and interesting finale to the second season.

With Guillermo not around, due to him finally leaving the vampire house, the vampire coven is lost, living in filth and squalor. As their failures compound, they are tricked into attending a play presented by the Vampiric Council, as their vanity gets the better of them. However, when Guillermo visits them to see how they are doing, he discovers (with ease) the evil plot to kill his ex-housemates. With the life of his “friends” hanging in the balance, Guillermo must shed the secrecy of his heritage or watch his faux-family parish at the hands of the Vampiric Council.

Conner’s Final Thought(s):
If you are a fan of vampire comedy works, like the original movie that it is based on, or just a fan of Flight of the Conchords’ and Taika Waititi’s humor, then you will love this hilarious and dark series.