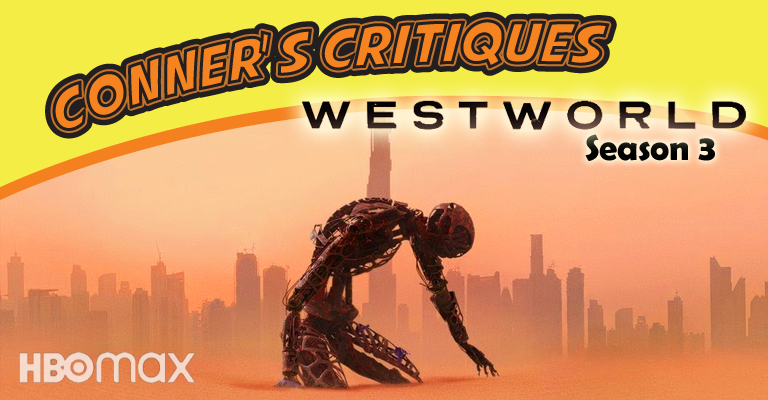 Entering the third season of the series, Westworld makes a major change to it’s setting, as the conflict between man and machine bleeds over to the real world. As this story bleeds over into our site, we are here to cover it for Conner’s Critique. The series has been out for quite some time, and for that reason, we aren’t going to be protecting you from Spoilers.

The story of Westworld has always been a strong one, showcasing a shift through time in multiple points in the story. With the series shifting into the current timeline, we are drastically taken out from that storytelling tool, until the story starts to focus on Caleb Nichols played by Aaron Paul, and Engerraund Serac played by Vincent Cassel. While the story shifts between timelines on these characters though, it is not done to subvert the storyline, or confuse the focus point.

In place of the main question of timelines, they subvert with the question of what pearls, personalities, did Dolores, played by Evan Rachel Wood, smuggle out of Westworld? What is her actual goal? Our first major spoiler of course, is that they were all Dolores. She plays a game with the fate of humans, which she believes will help build a world for her kind as well. To decide the fate of humanity, to break them of their stories, Dolores will turn to one of the very people that the system placed on rails, to decide if Humanity should stay blind, or finally be free. A choice so difficult, which may lead to the death of humanity, but so important.

One of the best things about this season was the performance of newcomer to the series, Aaron Paul. His story, unveiling, twisting, being uncovered changes the entirety of the story. Fate believed at first, and then becoming all pre-planned. His struggle, strife, and decisions don’t feel forced, or fake. Aaron Paul is always very skilled in his performances, but the gem of the series might very well have been Genre. Not only exploring his perception of the world while under a psychotropic drug almost telegraphs the future of his storyline.

Of all the Dople-Dolores(es), Tessa Thompson’s story was the most tragic. As her alliances shifted, she caused the viewers to make hard decisions for whose goal we were rooting for. She was a hero and a villain all at once. The human aspects of her character, which partially came out of nowhere, made her a very sympathetic person. To in such a short time, make the audience fall in love with her family, and just to have it taken away… (Trigger Warning: Does include violence against children.) It was hard to watch.

The last thing I will say, is that during interviews, Ed Harris stated that he didn’t join Westworld to play the man in white. The decisions with his character’s trajectory in this season were highly questionable with that regard. It was believable that he was being set up to be the hero of the series in some way, until the conclusion of the season removed any question. I can’t wait to see what they do with the changes to the character in the next season.

While it was a deviation, the season was still strong and highly watchable. Nothing felt out of character for the regulars, and the additions to the season were believable and interesting to show a wider power struggle outside of the park, that matched the power struggle set forth in the first season of the show.

If you are a fan of the western genre, you will be let down, but if you are willing to lean deeper into the real-world aspects of the series, then you will enjoy this show’s third season.