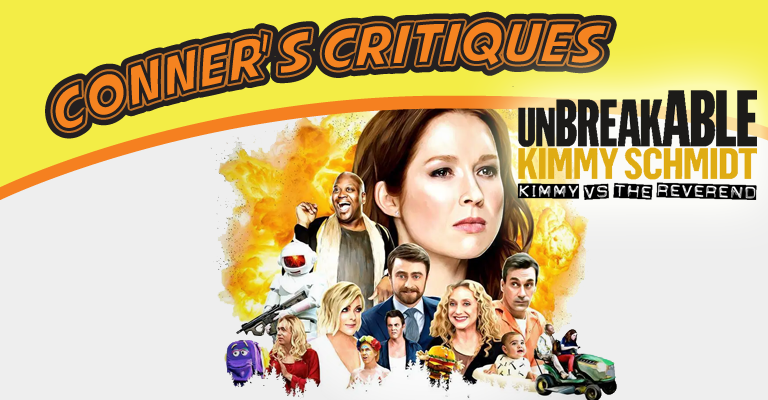 While some felt that the series ended too soon, Unbreakable Kimmy Schmidt had a pretty awesome run on Netflix, with a lot of series not making it past the second season renewal. When word came down the line that the series was ending, whispers of a movie were heard around the streaming verse. What wasn’t heard was when it would release, and that it would be InteractiveSTORY: 7/10
It’s a cute story and a little insane. The story of Kimmy picks up down the line, with the characters having had a lot of changes to their lives. That being said though, they are all a slave to the crazy antics of the fictional world that they live in.

The movie starts with you taking on the mission of finding out The Reverend’s dark secret, and closing that chapter in Kimmy’s life once and for all!

I will say that as far as interactive movies go, I felt cheated by the story that was designed. If you choose wrong, then the story pretty much just ended. Rarely could you do anything specifically that would change the outcome of the story at all, in fact, everything you did wrong would just reset the movie to keep you on the rails.

The format did help create a situation for many of the characters from the series to make spectacular cameos!

I do give huge props to Daniel Radcliffe for his role in the series, it’s not great acting, but it is a lot of fun to see him act out this ridiculous character.

OVERALL: 7/10
It’s a fun break from reality, but it doesn’t last as long and feels entirely on the rails. I won’t say the format is lost completely on this film, because the failures are a lot of fun.

Additionally, without spoiling, the conclusion of the series is very fitting and well designed considering the start of the series, and the journey it takes throughout the seasons.

Conner’s Final Thought(s):
If I can give you one suggestion while playing the game/movie, make it a point to take out your revenge on the Reverend whenever you can. Like no matter how dark. It’s worth the humor, trust us.