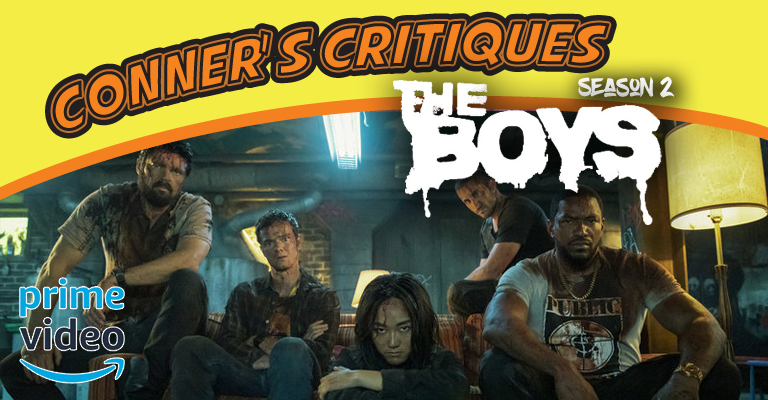 It’s been back, and it’s over, but if you haven’t already jumped on the Boys train, now is your chance. If you are a true Supes virgin, check out my critique of the first season Here. People wondered, what could the show do with a second season, thinking they’ve reached the bottom of depravity. However, they proved that there are depths at which they can still troll the seabed of gore. Warning, there be Spoilers ahead.

It’s not a bad story, even how they presented it. The love story between Hughie and Starlight isn’t horrible, but feels more realistic then the first season. In the end, however, it feels like they wasted the opportunities provided by the comic books in their presentation on the television screen. So many issues could have deserved their own season, and probably should have to give their stories justice.

There is fun crossover between the stories, but none of them ever really fully get the spotlight.

ACTING: 8/10
While the story may not have been as amazing, but the acting is still impressive. Everyone is giving it their all. They’ve became more comfortable in their skin. The greatest inclusion to the cast however was Aya Cash playing Stormfront. It’s weird how likeable the character comes off, and then the floor is pulled out on you when you learn her connections to the Nazi party, and her personal bigoted views.

That was the point though, the season did a great job showcasing that, thanks to the work of Aya Cash. If that bothered you, then maybe that was the point? Homelander does a great job showing so many insane emotions jumping back and forth, while Karl Urban ventures deeper and deeper into psychotic decisions. Remember really none of them are good guys… well maybe Hughie.

OVERALL: 6/10
I have to say, the thing that struck me about the series was all the supporting storylines were interesting, and the primary story of Stormfront brought a lot of attention. I only hope they can give the Love Sausage and head explosion storyline more attention in the third season of the series. If Amazon gives it a third season, as we’ve seen that streaming services have a hard time when it comes to breaking the two season wall.

Until then though, we do have the good news about the spin off series coming.

Conner’s Final Thought(s):
Not the best story, but fully enjoyable for the purposes of popcorn watching. Some people were really upset and review bombed the season due to the release schedule. I will admit that the show would have been better to watch over the course of one sitting.

With all the setbacks I mentioned, it’s definitely worth watching, and was a lot of fun. It’s just no Rosebud.