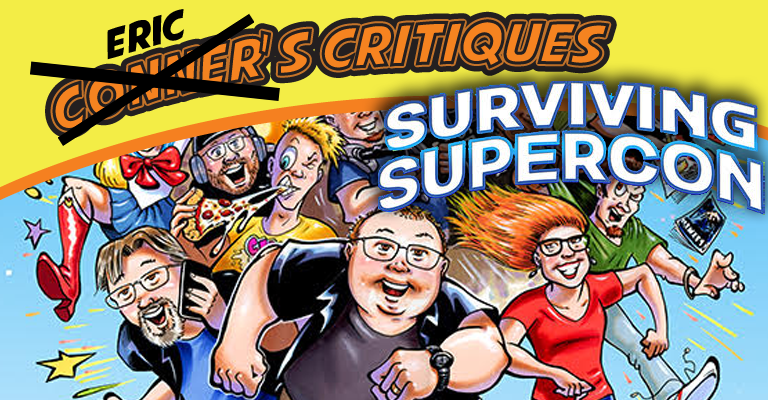 I like to take over the Critique whenever I see something that stands out, and Surviving Supercon is the movie we need right now! As nerd events start to return, Nature is Healing, so often in the past have we taken these gatherings for granted. I wanted to check out what goes into the creation of one of the most popular conventions in all of the United States!

As always we break down the critiques of the three categories: Story, Acting, and Overall, but we will make some adjustments into consideration… since this is a documentary.

STORY: 8/10
This documentary covers the events of the 2018 convention run of Supercon before ReedPop purchased the convention. In this story we follow Mike Broder and Sandy Martin the people who struggle and masterfully run the convention, focusing on each day, and telling the journey through one convention, while also talking in between segments about the history of the convention.

So many things go wrong, but they cover the problems and adapt. From scalpers, con fights, inept guards, to issues with cancellations, the con life gets crazy when you are on the other side of the registration table.

I love this level of coverage, and I have to admit, while Mike Broder was a lot to take when he got upset, I was constantly impressed by the capability of the team, and more specifically the jack of all trades that is Sandy Martin!

Every convention needs a Sandy Martin!

ACTING: 10/10
There is no acting really for this documentary, everyone in it is real people telling their stories, and showing how they are handling the last Supercon before COVID 19. Included in this film are Mike Broder and Sandy Martin who are unique and hard-working con lovers, but also included is Josh Catron, their multi-tasked Director of Operations of the convention.

Everyone in the spotlight is charismatic, and clearly loves the work that they are doing.

It’s easy to get burned out from a convention, and even after all the things that go wrong when the convention is over, they miss it. That’s the only reason they forget of all the horrible problems, because as Sandy Martin puts it, “If you could remember what happened, you’d never do it again.”

It’s clear that everyone involved in this convention loves their jobs, and it’s that love that pulls you into this documentary and makes you interested in how this all goes.

Conner Eric’s Final Thought(s):
I would have really liked a breakdown of the stats of the 2018 convention. How many people attended, the lists of crimes that happened to them, how many shirts they sold, any additional nitty-gritty facts that the convention keeps track of, that wouldn’t really make sense to dedicate during the convention, but would easily fill the time of the credits.

Even without that though, the convention film is still fun and enjoyable.