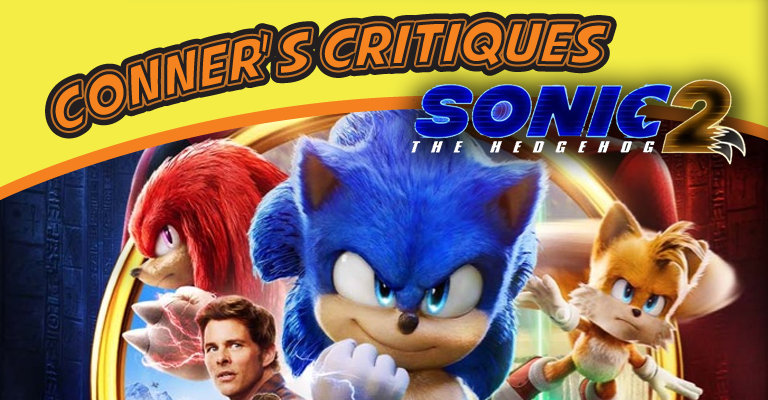 You gotta go faster with this one, as it’s time to talk about Sonic the Hedgehog 2. This film has just released on Paramount Plus free for all their subscribers. So what better a time to review this fun family centric video game film.

As always we breakdown our reviews into three categories: story, acting, and overall. So let’s jump in!

The story picks up with Dr. Robotnik stranded on the Mushroom Planet from the last movie’s stinger. Stuck on the planet, he has no means of escape but his genius. With it, the scraps from his vessel, and the powered quill of Sonic, he creates a pulse that shoots out into space, alerting the last of the echidnas.

When a small group of soldiers led by Knuckles enters the planet, they are shockingly tricked and defeated by Robotnik. Once they realize they have a common enemy, Knuckles agrees to return Robotnik to Earth to find out where Sonic is.

Flashing back to Earth, Sonic is trying to be a hero ahead of learning to master his abilities. While Wachowski tries to tell him he has to be more responsible, Sonic just wants to fast forward to being a hero.

He won’t have to wait long though, since as soon as Robotnik and Knuckles arrives, so too does Tails to help save the Blue Bomber. We find out though that Knuckles is the last echidna because his tribe were all defeated trying to discover the location of the Master Emerald from Longclaw. An event that took everything from both Sonic and Knuckles. Both Sonic and Knuckles were left abandoned without any parental figure or family. However, where Sonic was able to find an interest in a community and eventually the loving Wachowski family, Knuckles did not.

The two fight back and forth until their struggle allows Robotnik to obtain the Master Emerald for his own nefarious purpose.

Once betrayed, Knuckles and Sonic put aside their differences to defeat Robotnik and his new godly powers.

The story isn’t amazing here, but the work performed by both Jim Carrey and the voice actors make it shine. They pull you into the story and present a video game energy told through a live action format.

While I don’t think Sonics, Knuckles, or Tails would have any chance in defeating a uber-powered Robotnik, I was able to suspend my disbelief for the sake of fun.

It’s a very sad story that Jim Carrey is considering a pause from acting after this film. Once again he chews through the scenery as he hams up the role.

“This movie is peak Jim Carrey, and I’m here for it.”

This isn’t an insult, it’s perfect! This movie is peak Jim Carrey, and I’m here for it. This is one of the best roles he’s ever played, and it almost was like he was made to play a video game character come to life.

Ben Schwartz also does an amazing job returning as Sonic. He embodies the young and spastic energy of the blue blur.

I will admit that while Idris Elba does a good job voice acting the role of Knuckles, his performance does take me out of the show a little. You just see that giant red blob with white punching bags for fists and you don’t expect to hear the ever talented cadence of Idris Elba coming out of it.

If you are looking for a good family film to watch, Sonic the Hedgehog 2 is a great addition to the Paramount lineup of family movies. New fans of Sonic and fans of yesteryear’s will love to see the inclusion of Tales and the return of the amazing mustache on Jim Carrey. Plus I love the inclusion of the chaos crystals within the film.

I can easily see this film getting a third in the series. How can they move forward though without Jim Carrey? Hopefully, his thoughts about retiring can last a little bit longer to allow for the inclusion of Shadow the Hedgehog into the movie series.

You can watch this movie now on Paramount Plus.