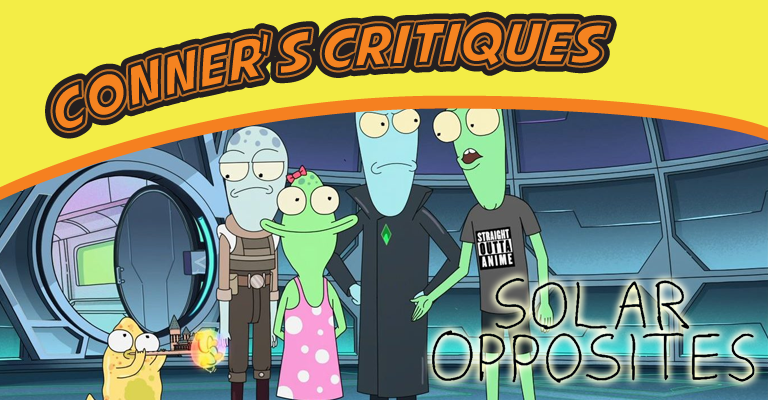 Solar Opposites is Justin Roiland’s new animated show taking place on Hulu. This show, unlike his prior show, focuses on aliens that have crash-landed on Earth. Unlike Rick and Morty, this show dropped all the episodes in one block, and we took the time to watch every episode for you. So should you watch this show, spoil this review for you, but this review may spoil some facets of the show, so fair warning Spoilers ahead.

STORY: 6/10
Part Superman, part Interstellar, the story of this show is that aliens are sent from their homeworld to find an ideal planet to take over and terraform to be their new homeworld. Earth would be in trouble if any of them knew what they were doing.

The story can be a bit frustrating, as the characters literally do not do anything toward their supposed goal. They seem to just exist in the world and do wacky things all while passing the time to an eventual event that they have no idea if they properly preparing for, or are prepared for.

I would give this show a lower rating for the story, if it wasn’t for the b-story tales. The broodlings stories seem to follow a solid if not boring school-based plot, with enemies that they overcome. Additionally, the story of the “Wall”, which is a mix between Snow Piercer and Mad Max was engaging, told over the course of multiple episodes. It really helped raise the score, but I would have hoped the shows main story hit the same levels.

ACTING: 8/10
While still relying heavily on the voice talent of Justin Roiland, the show does bring in a lot of comedians to help out, and add a little extra to the world. One of my favorites was actually Andrew Daly, who had a large rule in a b-story within the “Wall”.

A part of me wishes that Justin Roiland would allow someone else to do some voices, not cause he is bad at it, but because I worry about burn out.

OVERALL: 8/10
When we initially watched this show, it was literally between the seasonal split of Rick and Morty. So it’s possible we may have given it higher ranks because of our want and need for more Rick Sanchez, but this show did fit the itch. If you are looking for a comedy, and are a fan of Rick and Morty, then this show will be a good fit for you. If you like similar shows like Final Space, this show is much closer to that show though then Rick and Morty.

Conner’s Final Thought(s):
A lot of people are going to be racing to this content because they are longing for more Rick and Morty, and while this does fit the bill to a degree, this is not Rick and Morty. Rick and Morty seems to be playing a long game, slowly building up, referencing things, and growing the characters. It’s the fourth season though, so they should be growing and developing.

While this show is only in its first season, with the exception of the final episode, there really wasn’t any growth in the main character’s story.

There is a lot going on in the background though, and it is funny and enjoyable.