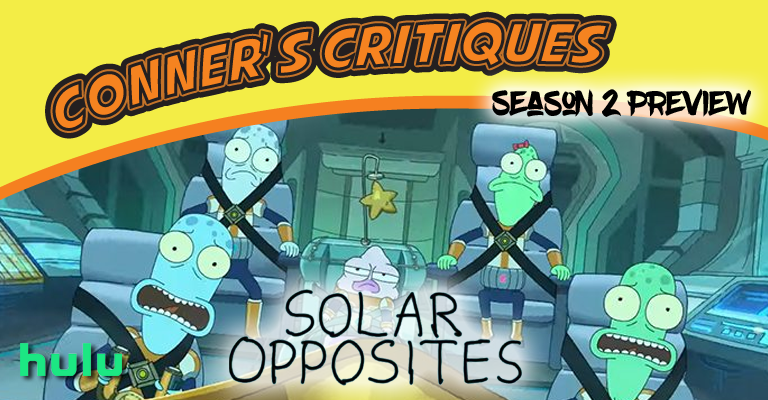 Normally we don’t review a season or series on a couple of episodes, but we got a preview of the second season of Solar Opposites, and so we decided to make a special exception, because of the early, but limited access we gained. That being said, if you were looking for a deeper dive, we did do a critique of the first season before, you can find it Here.

That aside, we are still focusing on the fundamentals, Story, Acting, and Overall. Let’s jump into this Critique!

STORY: 6/10
We don’t want to spoil too much of the series, but the wall is not gone or over, it continues, with a new story within it, and frankly, we are liking it so far. We can’t wait to see the conclusion of its story, as well as the rest of the season. Normally the series does not have a continuing storyline, but the wall is where the deviation is. As a story of the week bombards you with insanity and off-the-wall comedy, the story within the wall goes on and continues.

It’s so odd that the b-story is so captivating, but my only hope is that they get a full story where the b-story becomes the a-story once again. From our small preview, it’s hard to tell if they will do so, but we have hoped.

The stories that exist within the first four episodes are engaging and fun, and feel very similar to the first season, but the series doesn’t really have a lot of growth. That’s the point though, with an animated series, they leave developments for the wall.

ACTING: 8/10
The voice actors of the series seem to be given a lot of room, as they leaned off of Justin Roiland. Not that he leaves the show, his presence is still there, but they are giving the other characters more room to run with, and more time specifically with side stories.

I guarantee if you are a fan of animation and comedy, you’ll start to notice the familiarity of the voices in the background.

OVERALL: 8/10
If you liked the first season, there is no drop-off at all in the comedy or the quality. The series jumps right back into the swing with the first episode and all four of the first episodes of the series feel on point. If you do not like the series, then stay clear. However, with Rick and Morty still not back yet, this series fills that growing frustration of missing the show.

Conner’s Final Thought(s):
We are excited to watch the remainder of the season. We really love the comedy of the series. I hope you can enjoy it too.