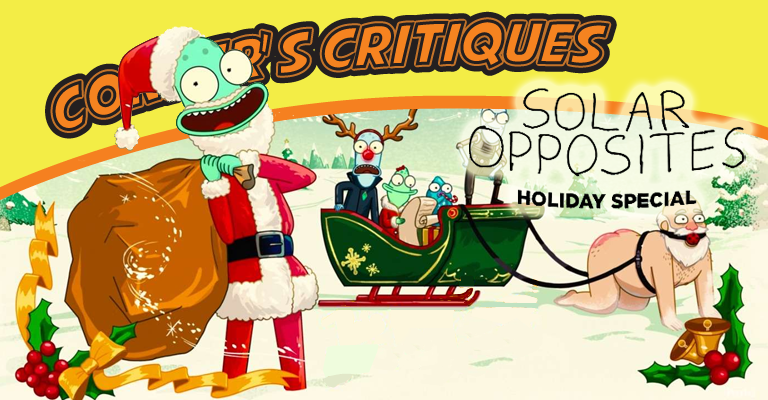 At the end of the final episode of Season 2 of Solar Opposites, they commented that they would never do a holiday special, it was all lies as they immediately announced a Holiday Special.

So now we are here, having watched and enjoyed it. The real question is though, should you watch it? As always we break down the critiques of the three categories: Story, Acting, and Overall.

STORY: 6/10
Similar to all Solar Opposites regular episodes, the special follows the same main-story, side-story format. Oddly enough the more traditional Christmas story is the side-story, or B-Story. However, it’s not surprising that the B-Story is so well designed, because they love messing with these formats, and have done so throughout the series.

Let’s jump into the easier to discuss story, the B-Story, first. The plot of the side-story focuses on Pupa and his journey. Pupa has just been yelled at for not having enough Christmas spirit by the rest of the Solar Opposites. As a result, he escapes to his safe place the church. Did anyone else think the Pupa was Christian? That was a very confusing but interesting idea for the character.

The main story, however, deals with Terry’s newfound obsession with the movie Jingle All The Way, and Korvo’s new technology that allows them to enter into the story of movies instead of watching them. After discovering that Jingle All The Way is not a good Christmas movie, the family abandons the plot. They continue with their celebrations, only to find themselves devoid of Christmas cheer. After a fun journey to regain it, they discover the only way to solve their problem is to finally finish the story of Jingle All The Way.

Unfortunately, time works differently in the Jingleverse, their word not mine. They enter into a hellscape, a world ruled by the child from Jingle All The Way, now fully grown and hateful of Christmas, due to never having received his Turboman figure.

Can we talk a second about that trope that every person is one missed Christmas gift away from becoming a Villain? Do we live in a society where materialism is so rampant, that the idea of missing a gift for your child will turn them into a serial killer is so ingrained in our society? I know this is a non-sequitur, but holy shit. Also, what’s with the idea that all you have to do is give the person the gift, no matter how many years have passed, and they will realize the errors of their way? Like the blood leaving the body of their first victim didn’t make them think “uh, maybe I shouldn’t be doing this” but a toy will.

Back to the point though, the story is a lot of fun. I don’t know if Jingle All The Way deserves this much hate… but I’m willing to accept the premise that it does, for the journey of the story. If you really love Jingle Along The Way, then this special is going to hurt. Also, what did Sinbad even do? Make a lot of cheesy comedies that made people guilty laugh? Not star in the Shazam movie? Why do we just hate him because he loved life in the 80s?

ACTING: 7/10
As always Terry, voiced by Thomas Middleditch, and Korvo, voice by Justin Roiland, are great, but who I’ve really got to give credit to for this special is Sean Giambrone who plays Yummyulack. His creepy obsession with the Christmas tree is just a constant joy to behold throughout this entire special. It’s awkward, it’s weird, and it’s a lot of fun.

OVERALL: 7/10
Within this movie, they specifically state that anything is a Christmas movie, as long as the movie takes place during Christmas. We specifically don’t accept that rule, but they clearly lean in on that to be the basis for this to be a “Christmas” special. Sure this movie takes place during Christmas, sure there is some Christmas-themed event within the story, but the family doesn’t exactly travel through a Christmas event, and experience the traditional Christmas lessons and growth.

It’s more like they massacre around it a Christmas plot. I will admit though that there is a Christmas story within the movie, but it is within Pupa’s B-Story.

So keep that in mind as you’re watching the film, it’s not exactly a hard fast Christmas story in the traditional sense, but if you just want to see the Solar Opposites slam their hooves around a Christmas storyline, then this will be a great film for you this holiday season.

Conner’s Final Thought(s):
I have to say, Justin Roiland, and his writers, have done such a great job creating fun and enjoyable B-Stories. It makes me think are they trying to get Hulu to do a slew of spin-offs, and are pitching backdoor pilots nonstop. I would love to see a Pupa series about his adventures. How about an entire series dedicated to just the wall? I mean there are so many great standalone stories within the world of Solar Opposites. When Solar Opposite ends, will there be a spin-off? So many spin-offs? I’m all for it!