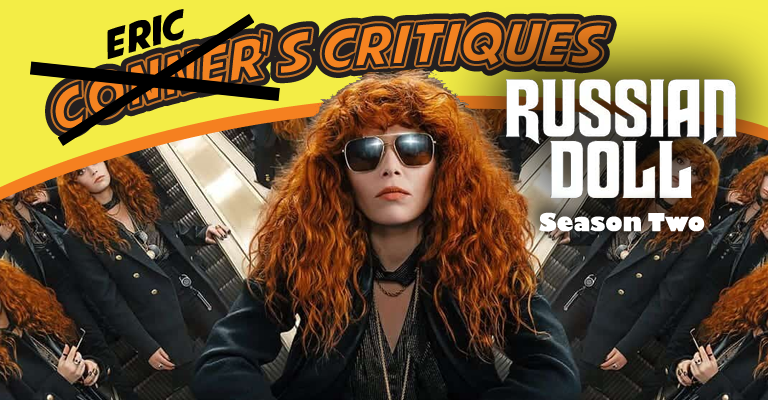 The new season of Russian Doll is on its way to Netflix on April 20, 2022. We got a chance to watch the new season before it went live and boy were we excited to dive deeper into this madcap time paradox and series that much like its main character, just cannot be killed.

We reviewed Russian Doll’s last season and it’s been quite some time. So feel free to catch back up on the series by reading the review Here. If you didn’t follow the link, don’t worry we are dedicating a portion of our story review section to talking about the prior season. Following discussions on the story, we will also be reviewing this show based on its acting and overall.

If you haven’t watched the 1st season of Russian Doll please stop reading here. There will be Spoilers ahead for the first season.

In the first season of Russian Doll, you will find yourself enamored with the life of Nadia, a woman on her birthday who for some reason cannot stay dead. Every time she dies she finds herself back at her birthday party in her friend’s bathroom. Over and over again. Countless times.

As she struggles to find out what is causing her to be stuck in this loop, she discovers Alan, played by Charlie Barnett, who is also stuck in a loop. Alan is also celebrating his birthday. The same day. Due to their lives crossing, and not helping each other, they both found themselves dead. What follows though is a loop that is stretched too thin, and eventually snaps. Now they have to work together to fix time before they too disappear. When all is lost, the two enter into separate loops and end up saving one another, and become friends, and preventing their deaths. With time snapped back in place, they sever the loop and save the universe.

Now 4 years have passed at the start of the second season. Alan and Nadia have remained close, and every year on their birthdays they keep track of one another to prevent another time loop from occurring. However, when Alan convinces Nadia that they should let it go and move on with their lives, Nadia’s fate won’t allow it. She enters a subway train and assumes she stumbled into a 1980s Flash mob. It’s not though, it’s even more unbelievable, the train ends up taking her through time. When she rides the 6622 train, she finds herself back in The 1980s.

Now Nadia has the ability to right the wrongs caused in her life by her problematic mother. When she tries to, she begins to learn that it wasn’t so easy for her mother and her mental issues when mixed with the difficult personalities in her family.

While trying to discover, uncover, and repair the sins of her mother, she finds herself in yet another terrible situation. Much to Alan’s dismay, who just wants to use the time travel to connect with a family member who has been long gone.

“If you’re a fan of mysteries, character journey, and character development, then I highly recommend you watch the new season of Russian Doll.”

The story this season is manic, it’s confusing, and all in all engaging and enthralling. If you’re a fan of mysteries, character journeys, and character development, then I highly recommend you watch the new season of Russian Doll.

Natasha Lyonne’s performance as Nadia is once again amazing. The only that, in my opinion, tops her performance, is the amazing scene-stealing talent of Greta Lee as Maxine. I’m not allowed to, nor would I want to spoil the adventure that the two take in the second season of the show, but I loved everything about it!

I also have to commend not only the story but the acting of Chloë Sevigny as Nadia’s mother. The scenes they pull off this season delving into her backstory and the topics regarding mental health are impressively done. It’s tragic, especially with how realistic and enthralling the story feels.

I know there are a lot of the people that are going to watch this show who are going to be really into time travel and time paradoxes. With that known, I want to warn you to not try to dig too deep into the science of the show. You will get lost in a sea of madness. I don’t think that is for lack of their design, however. They were definitely not being lazy or creating stories that they thought would just “sound cool.” The show however exists and is limited to the viewpoint of the series’ main character, and her focus never really ventures into scientific questions of why her journey is happening, or how it started.

With all that said, however, it’s amazing how many subtle things they hit in the background of the show. From all of the background work in the scenes, it’s clear they put a lot of attention into their creation. It’s hard to say this to viewers, but it might be best to just shut up and enjoy the ride.

With the long wait of time between the first and second season, I was afraid that COVID had officially killed Russian Doll. Time is always a factor in television shows. Thankfully no one on this show was a child, as that would have been a final nail in the coffin of season two. The show gracefully took its time though, and even decide to extend the gap in their world a little further placing the second season’s story four years after the first season. If they do continue the show for a third season, I can only imagine the insanity that will ensue as a result of the ever need to spiral the lives of the main characters into an even more wild problem of time and space.