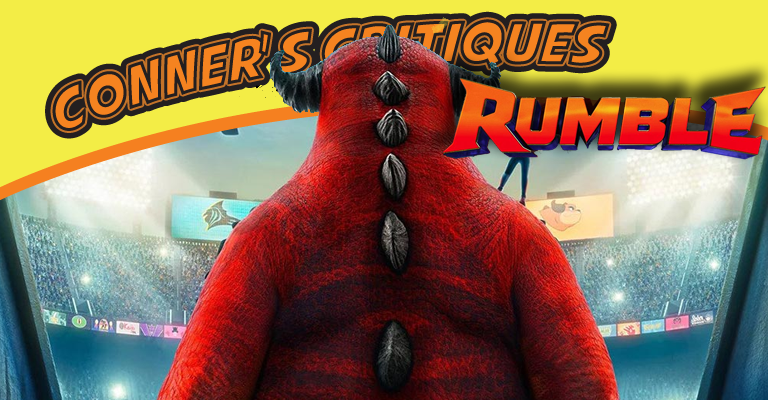 We’ve been waiting for this film for over two years, but due to COVID-19 the film was pushed back and pushed back from its theatrical release. Now thanks to Paramount+ and the prevailing nature of streaming first-day release films, Rumble has a firm release of December 15, 2021, and is coming to homes across the country. So when we got the chance to review this film early than its release, we jumped at it!

STORY: 8/10
The story of this film deals a lot with the concepts of lineage, and what our parents leave behind, and either living up to them or standing on our own. This is showcased in two different ways, as Winnie Coyle deals with the very soon destruction of her father’s legacy when the town’s monster wrestler decides he doesn’t want to live in the shadow of the town’s history. Wait… maybe I should start a bit earlier.

The world of Rumble is a place in which Kaiju-like monsters live side by side with humanity, and in fact have taken up the job of fighting one another in the ring to entertain the masses, and earn a place in our world. The town of Stoker had one such amazing monster fighting for the fame of the city named Rayburn. His coach Jimbo Coyle helped him be the best fighter in the world, but while touring the world on fights their ship sank in the ocean and both the champion and his coach were lost to the world.

Winnie is the daughter of coach Jimbo Coyle. When the current champ Tentacular betrays the town and flees to the bigger city, the town of Stoker is left with managing the debt of the land and Coyle Stadium maintenance without a source of income. To solve the issue they agree to sell the stadium to a rival city that will destroy it and put up a parking lot with a shuttle to their monster wrestling stadium.

To prevent her father’s legacy from being destroyed, Winnie heads to the slums to find a monster to replace Tentacular and stave off the selling of the land. While searching for a new champion she reconnects with a childhood friend, a monster named Steve, who actually is the very son of the prior champion Rayburn. However, he has fallen far from his father’s footsteps and doesn’t want to have to deal with the shadow his father casts.

Can the two together find a way to honor their father’s legacies in their own way, can they save Stoker? You’ll have to watch the film to see it.

I will say however the underdog story isn’t a new one. This one plays it pretty by the books. I was actually really surprised how much time was spent showing off what it’s like living in Stoker, and how little time was spent showcasing the history of Rayburn and coach Jimbo. It was a great way to set up the world, and frankly was interesting how they decided to show less of the history of the prior generation, and instead talk about it through character motivations.

If you are looking for a film for the family, then this is a pretty safe film with a good moral point, without being too preachy.

ACTING: 7/10
This is once again a voice-acting solo film. No physical acting, so all of the actors have to create the mood of the characters with the aid of animators and only the power of how they deliver the lines. While I normally love Will Arnett, for the first quarter of the film his portrayal of Steve the Monster feels a little less than what I know he is capable of. However, when the character begins to lean into his destiny and caring about others, Arnett begins to shine in his role finding a depth of character I was looking for from the start.

Winnie, voiced by Geraldine Viswanathan, really performs in this role showcasing a lot of hyper and optimistic energy. She is the soul of the whole film. However, a film like this does need a villain, and can only be successful if it can make the audience hate him. Boy did they choose a hard person to make unlikeable.

Terry Crews plays Tentacular, the champion that abandons Stoker, and stands as an adversary to Winnie and Steve being successful in their goals of saving the town stadium. While Crews can have issues in the twitterverse for his personal beliefs, he still is a pretty likable person who comes off more as bark with no bite, odd considering how amazingly fit and muscular he is. However, whether it was solely the story, Crews’ performance, or a combination when styled by the animation, he does a great job being the representation of a stuck-up jock character from the 80s that the heroes have to rally to take out.

It’s a fun run, and for the most part, the cast does a great job!

OVERALL: 7.75/10
Normally parents get a bit bored or frustrated having to watch a children’s story all the time. I honestly think this film is less a children’s movie, and more an 80s inspired underdog story that is told through the lens of a monster world thanks to the help of the source it is based on, Rob Harrell’s graphic novel Monster on the Hill. While the original story was not wrestling-themed, this version seems to work with the more modern mentality.

Conner’s Final Thought(s):
If you like Wrestling, you’ll appreciate the humor of this film talking boxing and wrestling tactics and the merging of dance to produce great defenses and strategy.