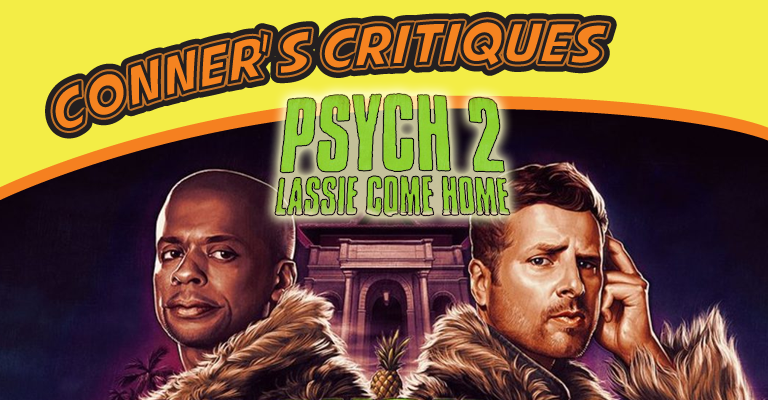 We have been Psych-os for quite some time here at Nerd News Social. We watched the entire series live on USA Network, spotting the pineapple the entire time. We entered every Spot the Pineapple contest and attended every panel for the show during it’s run at San Diego Comic Con. When they announced the show was coming back in the form of a Christmas movie, we got a sneak peek of it at that same Comic Con. When the news hit that Timothy Omundson had suffered a stroke, his appearance in the movie made more sense.

We waited for a while to see the new movie so that Omundson could recover because, without all of the crew, the movie wouldn’t feel like a Psych movie.

Then the Peacock app was announced, and the movie was once again postponed so that the movie could be one of the first exclusives on the streaming platform. Now that the app launched last Wednesday, anyone can watch the movie for free with the new app!

We will do the best we can to not spoil this review for you, with regards to the story, but I will admit, if you don’t want to know who is returning for the movie, I recommend watching the movie first, because there is definitely Spoilers for the stars below.

STORY: 9/10
As one of the other people from the site, who will remain nameless, stated, it feels like a plot from an episode of the series, as opposed to a full-fledge movie concept. I personally do not view that as a negative though. Could the series had made a much larger and intricate plot? Yes, but could it do so while working around Timothy Omundson’s recovery? Not really.

The story may seem small in regards to the mystery, but the cast, their lives within it are no more smaller for the crime to be simpler. I will say that the only thing that I give negative about the film, is that for a series revolving around a psychic detective, or faux psychic detective, there really was no presentation that Shawn is even pretending to make people believe he is psychic anymore.

The return of Shawn and Guster’s friendship is even stronger than ever and seems like it’s evolved more to be less toxic in comparison to some of the early seasons where… culture was less sensitive. They have a friendship you wish you could have with your own best friend, but unfortunately can not, because… well… we are actual adults.

ACTING: 10/10
They never stepped out of the characters. No one misses a beat. Every single person in the series puts on their performance as if they were wearing a second skin in being the character. Dule Hill is Burton Guster once more. James Roday Rodriguez (more about that later…), with the exception of pretending to be psychic, has no issues reprising the role of Shawn Spencer. Even Maggie Lawson fills into her stylish pantsuit and personality as the bubbly Jules.

The harder one to talk about is Timothy Omundson. I won’t lie, and I won’t let people claim this as a spoiler, but Timothy Omundson has a difficult job portraying the stoic role of Carlton Lassiter after suffering his stroke. They did the best showcasing and incorporating the actors real-life struggles into the character. However, as a long term fan it was hard to watch his suffering. The hardest on Timothy Omundson’s performance though is Timothy Omundson.

He speaks about his performance, and how it was hard to get the voice and mannerisms down for the character. He states that he had trouble remembering his lines and that after all of his progress, he wishes he could re-perform his lines with his current condition. I will admit that while it tugged at my heart seeing him in his condition in the movie, I loved him in it, and was impressed one hundred percent by his capabilities so soon after his stroke.

Good news though for new fans of the series, you can watch all of the episodes for free on Amazon Prime Video, and both movies on Peacock!

Conner’s Final Thought(s):
I will admit that the movie pulls at the heartstrings. From the b-story between Jules and Shawn to the stunning final scene in the show, I can honestly say that any fan of the series owes themselves watching this film.

Right now it’s free to all users on Peacock App, with a simple ad block in the beginning of the movie, for us at least.

I know Steve Franks, and the cast, has said they are completely on board to return for more movies, even yearly, but if you guys want that, then all of you Psych-os have to watch and support this movie!

Now we have to talk about the Rodriguez in the room. James Roday Rodriquez decided that he is reclaiming his Hispanic surname. We commend him, but we have to admit when we heard… we started to see some interesting “pineapple moments” hidden throughout the season. Sean’s success and following on a telenovela, his affliction for Hispanic named or themed foods (Quatro Queso Dos Fritos anyone?), and probably the most telling of all the things is his love of Emilio Estevez. Charlie Sheen’s and Martin Sheen’s real last name is Estevez, when Sheen having been Martin’s stage name. When Emilio decided to go into acting, he wanted to stand out as his own man and retained his family name.

For whatever the reason James decided to reduce his name to simply Roday, (our money is on the fact that Roday would be more unique and allow him to stand out), we are glad that he decided to reclaim his birth surname, and we support his decision!