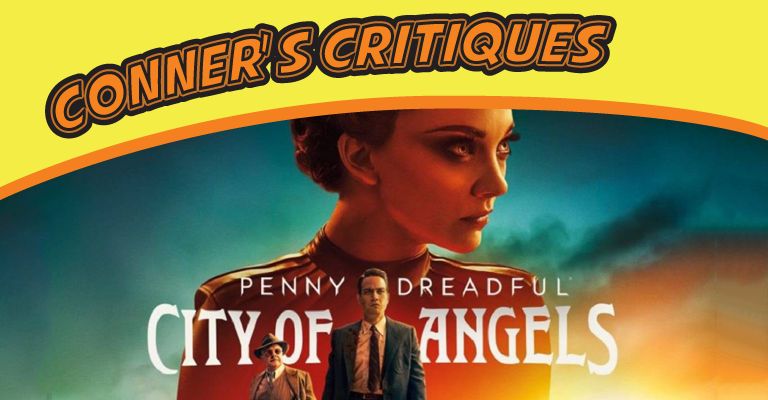 We were huge fans of Penny Dreadful when it came out in the past, in fact we even submitted a critique of it, that can be found Here, and I’ll even admit that I personally was caught off guard when I heard that the creator John Logan was bringing the series name sake back for “City of Angeles”.

The mix of the mystical, and the Pre World War II Los Angeles is an interesting time, as the society is on the cusp of moving away from the past, and more into present mindsets. The main character is true show, with the atheist Tiago. However, no matter how much he doesn’t believe, he is caught between the war of two worlds, and we aren’t just talking about Germany.

We are going to do our best during this critique to avoid spoilers, since the series literally just finished it’s first, and only confirmed, season. But beyond that, you know how we do here, we will be breaking down the critique into three categories: Story, Acting, and Overall.

STORY: 4/10
This was a hard one, the season just ended. I watched the whole season waiting for the shoe to drop, for the climax to hit home, for all the dominos to fall, and for the path to be clear. But unfortunately it never happened. We constantly feel robbed. The spiritual aspects of the show are ever present, connecting so many people in so many ways. However besides the sight of the threads intertwined, and the holder of those threads, we don’t get a lot of explanation. The big question that would have made this series so much better in our eyes, is WHY. Why do the etherial members of the cast do what they are doing.

I know some might argue that there is suspense involved, and the writer will decide where to provide. I would submit the counter-point though, maybe show it, or at least some of it before the end of the first season at least.

ACTING: 9/10
The character design is amazing, the acting from the stars is top notch. Not a single person has phone in their performance. Only one person has continued onto the new series from the original, Rory Kinnear, playing Peter Craft. In the original show, he played Adam, A.K.A. Frankenstein’s monster. I will be honest, a part of me wanted it to be revealed that he is the same person, but the years have allowed his skin to heal. Minor spoiler, he isn’t the same person.

Some scens were painful, and some were inspiring, and while the scene is well set, this is the work of the actors, specifically Natalie Dormer, Daniel Zovatto, and Nathan Lane, who as the main focal point of the story truly soar!

OVERALL: 6/10
We have to admit, we were a little disappointed. While the original series did a great job of continuing us on a journey of discovery, while still holding facts, and story aside to give more adventure into the second and third season, we feel here that nothing was really gained as to the larger story.

As fans we knew pretty early in who was committing all of the horrible acts, and who were the villains in the mortal world. What was left so confusing for us was how all the players play in the spiritual world, and no answers were given really to that end.

Conner’s Final Thought(s):
When all is said and done, we couldn’t give the series a bad rating, or a good one. We are hooked, we felt that the conclusion of the first season though will hopefully dovetail into the conclusion of all of those dominos, but until then it’s not really earning of a great review. We only hope that he series gets continued on or else no answers will ever be given to all of our questions.

If you liked this show, I highly recommend that you let Showtime know it!