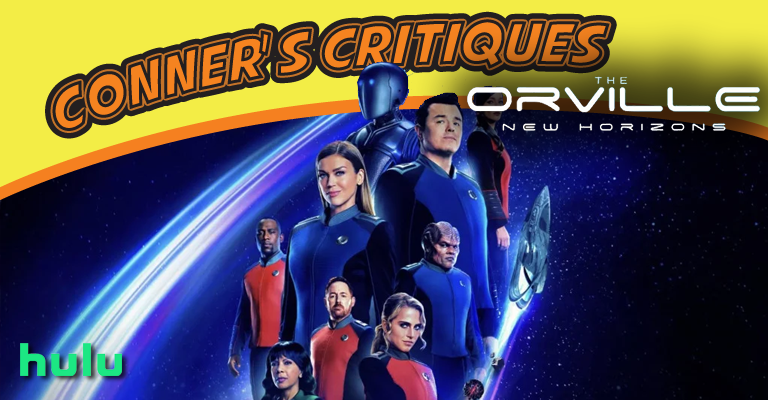 The Orville is back, having made a move from Fox to Hulu. It’s sad to say that this third season took us quite a long time to get to this point. I’m sure that COVID played a part in the long-delayed release of the third season, but creator and main character Seth McFarlane has said to multiple sources that the delay was more than just COVID. The transition between studio to streaming was not a gentle one.

That being said the wait is now over, and we are ready to review it! Unfortunately, we are just giving first impressions as to the first episode alone.

As always our reviews are broken down by story, acting, and overall. So let’s jump on into it!

The first episode’s story finally deals with the fallout of the Kaylon war in the second season. The crew is upset that Isaac is back on duty, and a high-ranking member of the crew once again. People shun him. They vandalize his lab. Even the pseudo-family he had prior now hates him.

The effects of the isolation and hatred take their toll and Isaac calculates that the Orville will run smoother if he was not there. So Isaac kills himself. Unfortunately though, for his plans, his species has a backup contingency. After a period of morning, the crew discovers a way to bring him back.

It’s a hard episode to watch, and then to have the effect of nothing happening.

The cast is a little wooden back in the saddle. The specific shining light for the season so far however has been Cmdr. Grayson, played by Adrianne Palicki, and Dr. Finn, played by Penny Johnson Jerald, who talk about and address the effects of suicide. Even J. Lee does a great job talking about and conveying emotion in the shadow of Isaac’s death.

It’s a heavy topic to cover in their first episode back.

Another thing I want to talk about is Norm MacDonald. Some people might not have known he was in this series due to the fact he voice acts in it. Now Norm has passed, but his lines were already recorded for this season, if not some of it.

It was nice to hear his voice again.

I personally loved the topics of military hierarchy, duty to your comrades, and the long-term effects of hatred upon soldiers. However, with the dark theme and topic of the first episode, I was really hoping they’d end the episode with self-harm hotline.

I still think they did a good job talking about the effects of suicide on people, that things will change, and how it affects the people you leave behind.

When Orville originally launched, it filled a hole left from there not being a traditionally styled Star Trek series similar to the Original Series or Next Generation for fans. The only competition to Orville was Discovery, which at its time could in no way be compared to the traditional format of Star Trek and had some growing pains. Orville was able to masterfully put its comedic spin on the old format of Star Trek.

As Orville returns after a long pause, the world has changed. Now we have tons of Star Trek shows. Picard delivers serious drama while also touching on stories of bigotry and racism. Lower Decks brings humor to the Trek world while making hard cuts to the lore of the series. More recently Strange New Worlds has perfectly replicated the energy of the original Star Trek series while updating its special effects and practical effects budget.

“While Orville does have a spiritual succession to Star Trek, it is unique and different. To compare it now to Strange New Worlds seems to do a the service to both shows.”

As a result, I’ve come to the realization that my prior thoughts in our earlier Conner’s Critiques need to be adjusted. While Orville does have a spiritual succession to Star Trek, it is unique and different. To compare it now to Strange New Worlds seems to do a disservice to both shows.

I can only hope that somehow we’re able to get more Orville in the future.