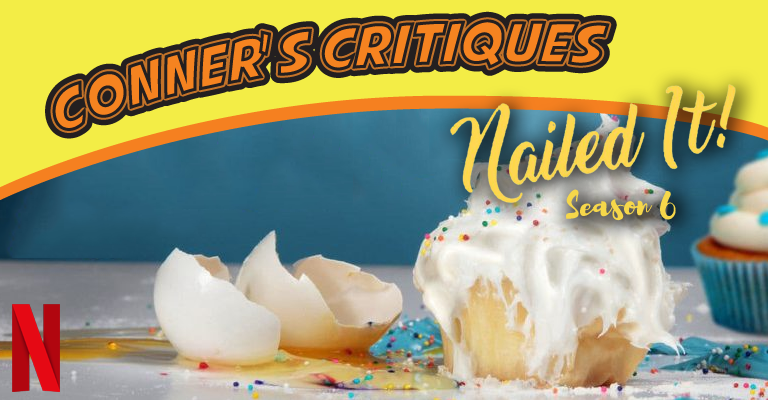 The world is still transformed from COVID-19, as we talked about in our prior season article (Find it Here), and the series choices to distance out portions of the experience continues on for the crew and contestants of Nailed It!

Like normal, this critique for season 6 will be based on three categories: Story, Acting, and Overall. So let’s begin.

STORY: 7/10
The story isn’t really a thing that applies to reality television. However, what we can supplement, is the theme of the episodes. From celebrity guests to the challenges, the real stand-out of the season is the specialty Jacques Torres episode which plays into Jacques’ chocolate wheelhouse.

Unlike the prior season, the solo contests are back, and it’s almost back to form with the exception of a couple of interesting surprises. From Twins to a special celebrity contestant, a national treasure! The season was full of fun and highly enjoyable!

ACTING: 8/10
I love Nicole Byer and Jacques Torres. Once again, they play well off each other, but Jacques is becoming less and less of the straight man as Nicole has clearly broken through his walls, and he becomes wackier and wackier over the years. My favorite joke of the season was Jacques taking over the role of Wes even if it was temporary.

Another amazing moment was when Jason Mantzoukas skyped in and once again brought his patented madness to the set!

OVERALL: 8/10
I have to say the series sees a lot less play with the specialty buzzers, and sometimes doesn’t even describe them. I imagine it’s part in relation to the contestants becoming so involved they forget they have them, but I miss them as a whole within the series. BRING BACK THE BUZZER FUN EVERY EPISODE. This has been my Ted Talk.

Conner’s Final Thought(s):
Definitely, a fun alternative to the stuffy cooking contest shows in the world. The series always reminds me of the SNL skits about the unholy abomination cooking show skit. The difference is these creations aren’t intentionally horrible, and that somehow makes it funnier.