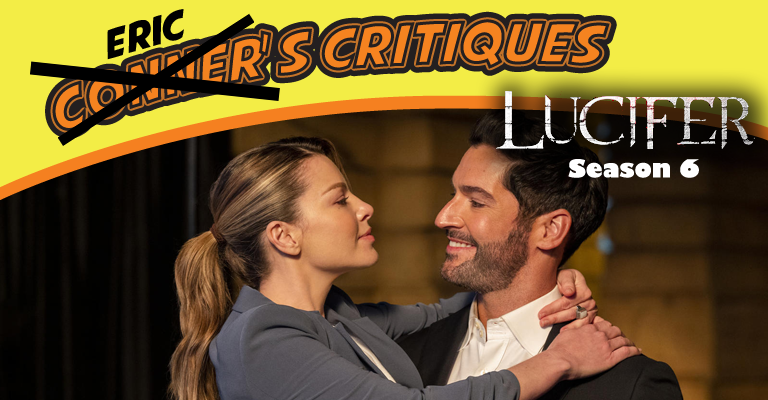 The time has come for all good devils to come to an end as Lucifer closes out its 6th and final season on Netflix. When we were offered a preview of the ending, I tripped Conner so he’d be out of commission so I could take over his critique.

While we’ll be following the normal style of the review format, Story, Acting, and Overall, we have been asked to not ruin the surprises of the series, so consider this article a MILD SPOILER article. Act accordingly.

STORY: 8/10
First and foremost, Lucifer is a show that plays with the stories of the Bible, and a lot of people may be frustrated by that, thinking the series makes fun of the devout, but there is something beautiful about the way that Lucifer is presented in this series. I mean, you may be stuck with the devil you know in the Bible, but this shows Lucifer is the devil you’d want to know!

As a whole, I might give the series a 7 if graded as a whole, but this season of the show was really impressive. The show took the concepts shown and told through the earlier seasons and gave them a beautiful re-read. It was very fitting in a self-absorbed Lucifer way. It wasn’t just self-referential though, as it progresses once again through its breakthroughs and even tells a new story. One that is even more powerful and important than the prior season’s battle royal to see who would take over the throne of heaven.

ACTING: 9/10
Everyone got their moment this season to show off how awesome they were as an actor. Some of the best moments though come from Mazikeen, played by Lesley-Ann Brandt, who has grown so much from her powerful but 1-dimensional demon of the first season.

Lucifer clearly though has grown the most as the shocking and noble conclusion of the series shows the final if not painful things that a selfless person would do for those he loved.

All through the show, we saw varying levels of infatuation between Lucifer, played by Tom Ellis, and Chloe Decker, played by Lauren German. Its been many, from sexual infatuation in a game of hard, to just wanting her to see him as a person with value. It was interesting for the show to cast light on the progress once more, but we’ll appreciate it.

OVERALL: 8.75/10
This is an amazing show and if you haven’t seen it yet, you’ve got some homework to do. Go load up your Netflix, of siblings account, and power through the show. I’ll wait. Okay, I won’t wait. If you want a good strong watch though, with comedy, Sin, and surprisingly insightful psychological introspective comments about religion and humanity, then watch this fun show now!

Conner Eric’s Final Thought(s):
This show is over, but I’m not upset. They found a great way to conclude the story that feels honest, grounded, and respectful of the journey we as fans have been on. It’s clear it steals a bit of style from Six Feet Under, but it works and feels more like an homage than a theft. Additionally, it’s important for a show with such a following to land a strong ending, fans will be very happy with the heartbreaking and heartfelt beautiful conclusion of the series.

Check out the final season Here when it drops on September 10, 2021!