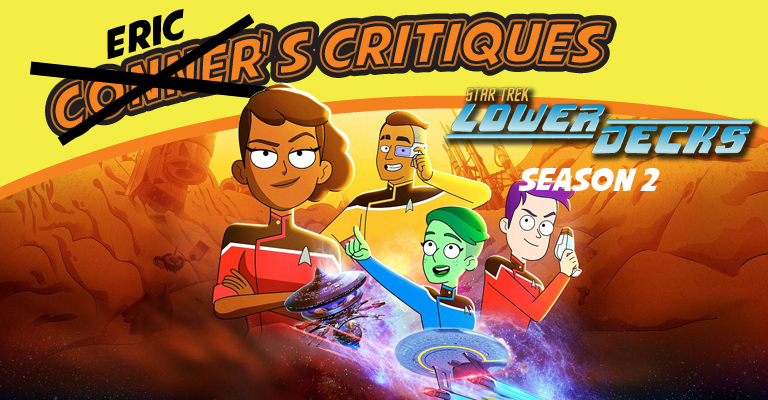 First, if you haven’t seen the first season of the show, there will be spoilers. Additionally, if you don’t know if you should watch the first season, then check out our First Look for season one Here. Now that you are actually here, for the right reasons, let me also let you know that there will be some spoilers for the second season, but we won’t spoil the final cliffhanger, so… SPOILERS… There… are we ready?

Our review, like normal, will will be based on three categories: Story, Acting, and Overall. So let’s begin.

STORY: 7/10
The show last season ended with the death of Lt. Shax, the crushing realization of the lost memories of Ensign Rutherford, the reassignment of Ensign Boimler, but the awesome last minute rescue by Next Gen G.O.A.T. Captain Riker and the U.S.S. Titan. A one, and a two, and a three, and a four impressive factors to have happen all within the last minutes of the season finale. Man, Mariner really does know everyone. However, that left huge feet for the new season to follow up with for their second season. Go big or go home… right? So what is the follow up for this season? A new security officer with a deep cut to a Next Gen race, and several episodes of awesome lore exploration. I also like how they didn’t just retcon the season right away back to the status quo, they created a way that Boimler can live his dream and still be back on the Cerritos a couple episodes in. The one thing I will say though, the end of the season left a lot to be desired when compared to how bad ass the first season was.

There were great journeys in between, and the conclusion of the season was impress. To their credit, they always rock the lore and create some unique experiences. The bar where Kirk and Spock drank was one of my favorite moments.

ACTING: 8.5/10
Captain Freeman, voiced by Dawnn Lewis, and Mariner, voiced by Tawny Newsome, continue to showcase their relationship and it’s continual growth. It’s also insane seeing how many things Jack Quaid is in recently. His representation of Bomlier the wanna be Star Fleet ensign who makes good, then by no fault of his own, after proving himself in a very Mariner way, he finds himself back in the Cerritos.

I will say that the must impressive performances this year were from Eugene Cordero, who plays Ensign Rutherford. On top of being a major sacrifice from the prior season, he deals with the repercussions of losing his memory, and his heartfelt pleas to hold onto every memory, and his constant comparing of himself to the former version is very emotional. It’s nice that so much time this season was paid to this storyline.

OVERALL: 8/10
It’s not as great as the first season, but it’s still awesome and fun to watch. If you are a huge fan of Star Trek, then this series is a must watch, as the writers must literally walk around with a bible to the universe to keep making such amazing and great references to the lore of the Star Trek universe.

Conner Eric’s Final Thought(s):
A lot of people are ruiners. They try to say things like Lower Decks isn’t canon, or it’s not real Star Trek. Calm down man. If we can have three separate timelines in our Star Trek canon from the movies and new shows, then Lower Decks can be canon, or at least canon adjacent. Enjoy your favorite content, and stop trying to tell people how to enjoy theirs! I can’t wait until I can enjoy more Lower Decks personally.

If you want to take a deeper trek with us, then check out our interview with Carl Tart, the actor who plays Lt. Kayshon Here!