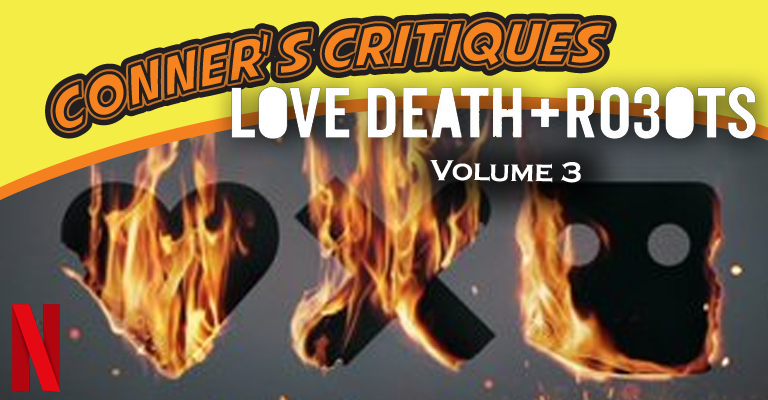 Love, Death & Robots is back for their third volume in the series. While volume 2 was a lot shorter than the first in the line-up, volume 3 comes out strong with a total of nine episodes.

As always the series produces stand-alone episodes that take amazing short stories and convey their powerful messages and morals.

Traditionally we break down our reviews into three categories story, acting, and overall. So let’s jump on it.

There are so many amazing stories within this season of Love, Death & Robots. I’m going to limit my review however to my two favorite stories, two that stand out above the others.

The first one is called Bad Travelling. It talks about an abominable beast/crab monster that finds its way upon a ship and devours a large portion of the crew. Before it can escape it seems to get stuck within the hold of the ship. One of the crew takes it upon himself to communicate and negotiate with the crab. The crab simply wants to be taken to an island nearby so that it can kill and devour its citizens.

The sailor goes back to his crew and talks to them, explaining to them that they might be able to trick the crab. That they should go to an island devoid of life, therefore saving hundreds of lives at the risk of the crew along the way. When he discovers a portion of the crew would rather kill innocent people than risk their own lives he takes it upon himself to make sure that he completes his noble cause of saving as many people as possible.

The second story that I love in this volume is Mason’s Rats. This is a story about a farmer in a futuristic world who must deal with the repercussions of humanity’s interaction with rat biomes. Rats have evolved to become smarter and have started using tools. So the farmer must evolve his tools to eliminate those rats. Using an adapting advanced technology to murder and slaughter the rats leads to an all-out rat war within his silo. At what point though, is the violence worse than the cure?

Both of these stories showcase some of the amazing styles and moral journeys that are usually covered within the series. The first being a tale of nobility and self-sacrifice and the second is about the costs and horrors of one’s actions. The reason why short stories are so great a setting for these moral journeys is that it is relatively easy to set up a premise so routed in society within such a short and truncated medium.

With acting it’s a little bit difficult here, most of these series are always animated by different parties for each story. So no voice actor sticks around for the next episode.

One specific episode of this volume stands out, however. Jibaro is a story about what appears to be a conquering force that stumbles upon a jewelry and gold-laden siren in a lake. She calls the men to their death until she finds one of the soldiers is Immune to her siren song. What tragically follows afterward is a lesson in greed, trust, and the definition of monsters.

The reason I bring this one up when discussing acting, or more specifically with voice acting, is that very few actual words are spoken within this piece. Almost all of the sounds outside of the soundtrack are that of singing, screaming, moaning, and similar sounds.

“The voice actors that gave produced the sounds mentioned above to this episode were able to convey so much emotion without the use of the English language. That is amazingly skillful.”

The voice actors that gave produced the sounds mentioned above to this episode were able to convey so much emotion without the use of the English language. That is amazingly skillful.

If you are a big fan of science fiction, short stories, Aesop Fables, or anything that relies heavenly upon a concept of morality, then you will once again love the series titled Love, Death & Robots on Netflix.

While not all the episodes were amazing, the majority of them are. Several of them at the very least are outstanding. All of them are well worth the watch.

With how short a format, and how many different studios they turn to for each episode, I’m a little disappointed that it took so long to receive new episodes. Additionally, for the first time in the entirety of the series, they returned to a story!

The story specifically is that of the Three Robots who explore the wasteland left by dead humanity. While normally a deviation of their format outside of the norm might get them marked down, I have to admit that the story told within their return was funny and really on point for how the world is going right now.