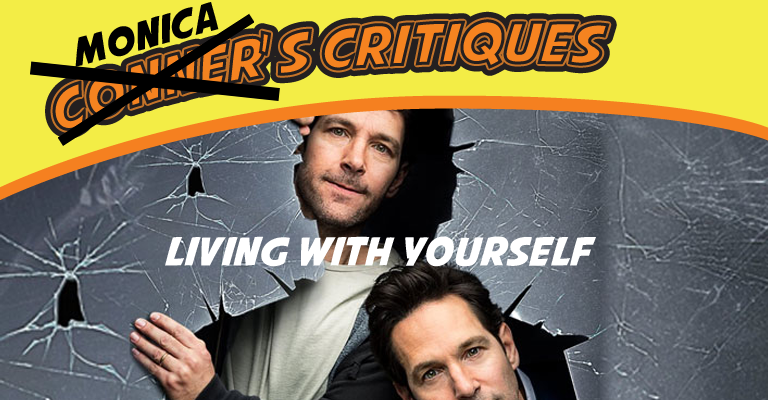 A few weeks ago, Netflix aired the new series Living With Yourself. Created by Tim Greenberg, who won two Emmy Awards for The Daily Show, and won a Peabody for Endangered List, I expected a dark comedy with amazing writing and thoughtful jokes… but I didn’t expect one that would manage to stir up emotions I haven’t felt in years.

If you haven’t seen it yet, do be fairly warned that I will be spoiling this series for you pretty hard. And mostly on purpose, honestly.

STORY: 8/10
Paul Rudd plays Miles Elliot, a man dealing with a mid-life crisis in full swing. At home, his relationship has grown cold and distant. At work, Miles is slowly drowning.

The show starts with Miles being late for a meeting, where he hasn’t prepared a pitch at all. He’s way behind on everything, and his boss makes it clear that he’s on his last legs. In swoops Dan, Mile’s coworker who seems to have completely gotten his life together over the last few weeks. Dan has taken the lead in this company as the new golden boy, impressing everyone, and eventually shares his secret with Miles. Dan went to a spa. Miles obviously scoffs at this idea, and who wouldn’t. How does a facial and foot rub turn your into a whole new person? Turns out, it’s because they take a DNA sample from you, murder you, bury you in the woods, then use your DNA to create a clone with all your memories. You think you’re you, and you feel like a better version of yourself because you are a better version. All your nasty impurities, faults in your genetic coding, and mental health issues are wiped away in a flash. Miles doesn’t even need glasses anymore! The problem here is the clinic had an issue with the euthanasia machine and original Miles survived the whole murder business and woke up in a shallow grave wearing only a diaper.

ACTING: 10/10
Everyone in this show is amazing and hilarious. Paul Rudd (Miles) and Desmin Borges (Dan) steal the show and keep me laughing. Desmin is one of my favorite comedic actors, and even though he doesn’t have the most screen time in the series, but when his time comes, he really delivers. Paul performs flawlessly as both versions of Miles, showing an impressive range and nailing the dichotomy of the characters, even as they slowly start to shift roles in very creepy ways.

This Way Up’s Irish beauty, Aisling Bea, does an incredible job playing Miles’ wife, Kate. We get a look into what her life is like a few episodes in, and why things between her and her husband have fallen apart. She portrays Kate in a way that a lot of married women can relate to, showcasing her desire to be loved and respected in all aspects of her life, and at the same time, not willing to put up with bullshit from anyone. The character of Kate is trying so hard to recover what was left of her relationship with Miles, and you can see the struggle in every micro-expression Aisling gracefully and intentionally shows us.

OVERALL: 8/10
With a combination of a great story, incredible acting, and a production team that really knows how to balance a delicate and dark topic with humor without losing the edge, Living With Yourself is a wonderful product, with characters that are relatable, that helps to stigmatize mental health issues by shining a light on them. The script is well written, the concept of being split by depression is accurate and on point without causing the viewer to feel bad while watching, and the delivery process is easy to consume. It’s binge-worthy, and has an important message at the same time.

Monica’s Final Thought(s):
So what intrigued me about this story was the synopsis. Paul Rudd (a good get) plays main character, Miles Elliot, who hates his job, has a loveless marriage, and basically hates his whole existence. The average onlooker would see this person has having a pretty decent life and complaining about nothing. They see a mid-life crisis. Miles aspires to write a play, but never actually gets started. He wants to have a family with his wife, whom he loves beyond reproach, but he’s pushed her away because he can’t be bothered to actually visit the clinic to get his sperm tested and starts fights with her all the time. He was the star of his marketing job for years, then everything fell away and he stopped performing well. If anyone tried to talk to him about anything, he would lash out in anger and accuse them of ruining his breakfast. Someone who didn’t know what they were looking at would say he’s just being lazy or grumpy, or doesn’t want to try. But a person who knows what this is like, and can relate to it, understands what’s really happening here: Miles has depression. And from the looks of it, he isn’t even aware that he has it.

Living with depression, you don’t specifically act “lazy.” You don’t have the ability to do basic things, like eat or shower. It’s not because you don’t want to, either. It’s the hardest thing in the world to get out of bed, because the blankets weigh a ton. I used to call myself the Mayor of Blanketon to shine a little humor on those days when I wasn’t able to get up. When you live with depression, you lose executive functioning. You know you have to eat food or drink water or clean your junk once in a while, and you try to, and you tell yourself to do it… over and over and over again. But it feels impossible. The sink is 4 feet away, and takes like 2 minutes tops to just rub some soap on your skin. Basic hygiene. But you can’t.

Maybe the most accurate depictions so far of depression in media that I’ve ever seen were in the episode of BoJack Horseman called “Stupid Piece of Shit” and pretty much the entire series of You’re the Worst. Living With Yourself now makes that list. It also showcases depression from a perspective I haven’t seen before; the duality of self. When you’re depressed to this level, you can see a good and a bad version of yourself. The hunched over, dirty, nasty, mean garbage person that you are, and the person you used to be. The person who was the life of the party, did well at work, and had friends. In Living With Yourself, this is represented by the clone that was produced as a way to “help” Miles become better.

As you watch the show, think about yourself and the people in your life. Who is struggling and you don’t even know because they’re putting on a mask? Who seems to have dropped off the face of the earth? Reach out. And if you’re struggling, there are tons of resources available out there! Mental Health America has a bunch of things available, from education to finding help to even helping those who need it, yourself.

And if you or someone you know is struggling with depression, and considering suicide, please please please call the suicide hotline (1-800-273-8255). TALK TO SOMEONE! You matter!