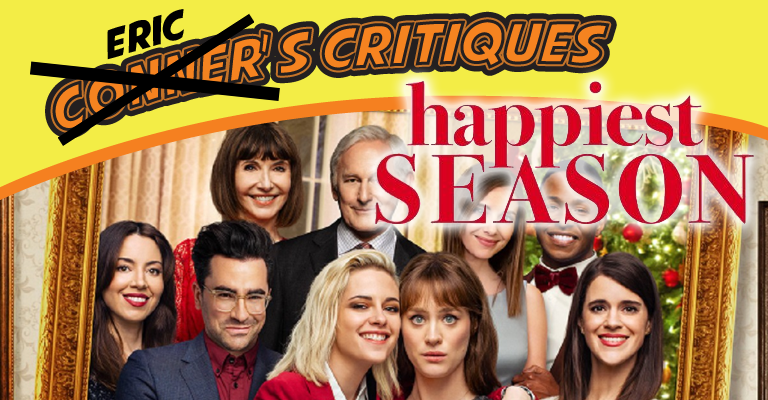 With the holiday season coming in hot, we need to not only get ready for an influx of merriment but a ton of goodwill to all humans. One of the movies that we got to check out early was Happiest Season from Hulu. This movie includes LGBT themes and as such stands out as a different type of holiday film. Normally these “Conner’s Critiques” are performed by Conner Sharp, but since I really was looking forward to this movie, I took over the segment!

I will, however, be following Conner’s format though, and this critique will be based on three categories: Story, Acting, and Overall. So lets begin.

STORY: 8/10
The story isn’t very original to be fair. It’s a holiday meet the family story, fish out of water story. The only unique feature of the film, however, is that the major issue with the family reunion is that Harper, played by Mackenzie Davis has not come out to her family yet. She fears that if she reveals her orientation to her family, it would negatively impact the holiday, her father’s mayoral candidacy, and cause her family to ostracize her. With that in mind, her girlfriend Abby, played by Kristen Stewart, plays along as her roommate as both jump into the closet.

I have to say, while the story was fun and interesting, the characters are well written, I am slightly off-put by the story concept being focused on coming out. I would have loved a simple holiday movie with an LGBT theme, without the transition storyline. With that expressed, I like how they gave the characters depth, weren’t afraid to make the main characters a bit of a monster, and avoid the obvious tropes.

ACTING: 9/10
I have to say, I haven’t been the biggest fan of Kristen Stewart in the past. I didn’t fall into the Twilight fan base, and as a result had a general dislike of her, which was unfair. Since the series ended, I’ve come to love her style of awkward comedy. The work she has done on Saturday Night Live, and other works have been very interesting and engaging. I am now fully team Bella, but still wouldn’t watch those horrible films. The rest of the film is filled with the likes of Aubrey Plaza, who is much loved from Parks and Recreation, Alison Brie, who was amazing in Community, and Kristen Stewart’s counterpart in the film Mackenzie Davis, who stood out in the recent Terminator movie Dark Fate.

The one person I was saving to talk about as well, who stood out with their very little screen time is Dan Levy. His representation as the best friend of Abby was so awesome, so real. So self-absorbed, but when the situation came to it, was the friend Abby needed. There was never a moment with him that wasn’t amazing. Also, his Straight guy acting is so on point! I also believe he can bench that much!

OVERALL: 8/10
This movie really helped me get into the holiday spirit. It’s been hard this year with all that has been going on, and while this film does feel detached from the world we live in today, maybe that’s what we need this year, as we aren’t able to see our families and loved ones, a window into what the world was, and will be again one day be if we are lucky.

Conner’s Final Thought(s):
One of the things I wanted to talk about here specifically was their intro and outro to the film. The calendar photo session, in the beginning, helps show you the course of a year in a relatively quick period. It helps get people into the spirit of this romantic comedy, without having to invest a lot of time into the story. The ending session of the Instagram feed lets you see what happened to the characters through the follow-up year after the events. I will say that since it is done in the form of an Instagram feed, it does start a year later, and rolls back to the date of the films ending.

If this film interested you, then check it out on Hulu!