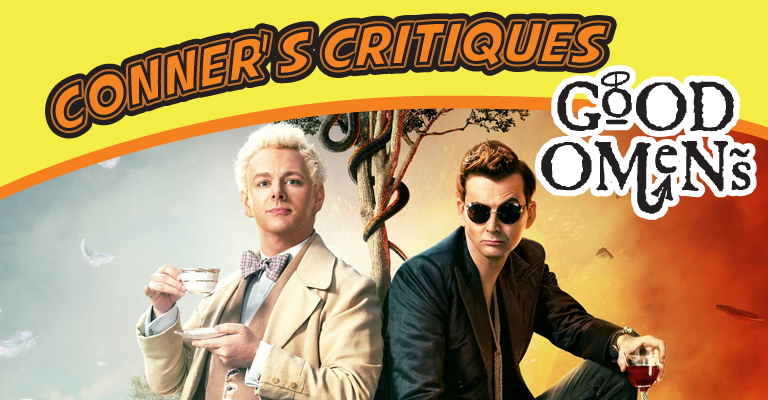 I am very excited, to get to talk to you about good Omens. Neil Gaiman seems to be involved in so many shows and movies these days. His most recent project starring Michael Sheen and David Tennant, as an angel and a demon must work together to prevent the Apocalypse.

As always we break down the critiques of the three categories: Story, Acting, and Overall. So let’s look into this devilishly good show.

STORY: 7/10
While the setting is the Apocalypse, it only serves as a good foil and test of their duo’s relationship. While I enjoyed the story, I found myself more invested in the relationship of Tennant and Sheen, then the events happening around them.

The show, and it’s story, was short and simple. Without the help of the flashbacks, it would be hard to stretch the story out to three episodes. That being said, the flashbacks help paint a picture of what built the interesting relationship between the two main characters. The writers use the flashbacks to show illuminate modern moments within the current timeline of the episode.

ACTING: 10/10
If you are a fan of BBC TV, then you most likely will have seen a lot of the supporting characters of this show in other shows. From Sherlock to Jonathan Strange & Mr Norrell, they do not skimp when it comes to acting talent.

However the most impressive part of the whole show, is the relationship between Michael Sheen and David Tennant. Their relationship is sweet, and slightly toxic. Because of their realistic and human relationship, it draws you in. Makes you feel for them.

OVERALL: 7.5/10
If I had to be overly critical of the show, the only part of the story that was annoying to watch, would be the arc of Adam forcing his friends to be around him. It was unneeded and was boring. Lastly it’s existence messed with the timeline of the events it ran parallel to.

Overalls the story is well worth the time to watch it, as the characters in the world is very engaging. The ending is very satisfying. I only hope they are able to adapt, and create more works for the characters to engage in, and continue the relationship and story of Good Omens.

Conner’s Final Thought(s):
I spent most of the time shipping the relationship between Tennant and Sheen. That being said it was very fun and interesting. People who are religious might be bothered by it’s imagery and Laissez-faire mentality toward the apocalypse.