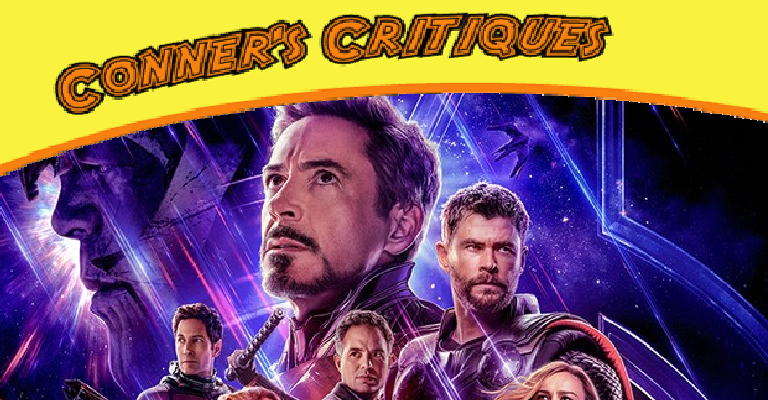 Hey guys, welcome back to Conner’s Critiques. Today we will be talking about one of the most hyped movies out there; Avengers: Endgame. So let’s jump straight into it. This time I will be switching things up a bit, while I will still be reviewing the movie by overall, and story, but I will not just be focusing on acting, but also directing.

STORY: 7/10
Whats great about this movie is it jumps straight into the Avengers Thanos took out half of all living things. We see Tony Stark in space and he is with Nebula (some people did forget about her). Just like the trailers, he starts a recording of himself through his Iron Man Mask to Pepper Potts. One thing we all knew was that Iron Man obviously was not going to die in space, however when the second trailer to Endgame came about, it shows Tony Stark in a white Avengers outfit alive. As much as we all knew he would be joining the final fight, it would have been nice to have an element of surprise. He is then saved by non other than Captain Marvel. We have no idea how she found him or how they got his coordinates since his ship died, but the Avengers were obviously waiting for him back home when he landed with Nebula.

From there everyone quickly figures out where Thanos has gone by scanning space for him and Nebula helps with locating her father, saying he spoke of his plan after he achieved his goal and they do map out a similar global reaction in space as they did on Earth when Thanos snapped his finger. The Avengers were able to fly to him and ambush him. Unfortunately, the global reaction seen in space was Thanos using the power of all the stones to destroy the stones. They end of killing him and then there’s a 5 year time jump.

Five years later, Scott Lang was able to escape the quantum realm. Eventually he finds the avengers and he tells them he feels like its been 5 hours instead of 5 years. From this, Scott thinks that there’s a possibility to time travel through the Quantum Realm. They seek out Bruce Banner and Tony Stark. When the Avengers pay a visit to Tony and explain the situation, he stresses that he will not risk Pepper or his daughter for something as dangerous as time travel and that Scott got lucky he returned from the Quantum Realm at all. Of course, Tony starts experimenting and invents time traveling in like……a few hours……I guess he never tried before?

Avengers decide to pull off a “time heist” and go back to the past to collect all the Infinity Stones before Thanos retrieves them. The team put their minds together and figure out where the infinity stones were in the past as we see throughout the Marvel movies for the past ten years. The team splits up in six different groups/teams and go to different timelines to retrieve the stones and snap back everything to normal.

Some stones are retrieved fairly easily, but others run into complication with past selves and other factors like Hydra. At this point of the movie it does seem like it slows down a bit. It’s understandable that there are six different stones with all these characters and they need to come together. They take their time in each time period and not rush the story, but it also feels like it drags on at many points especially with the movie running 3 hours. Something I found really cool was that they combined the past so well with the future selves being in the background and avoiding any interaction. They did an excellent job recreating scenes from Guardians, the first Avengers, Loki, etc. If you’re a true nerd and Marvel, fan, there are also many easter eggs and references to Marvel past, present, and future. The time travel also allows some characters to find closure and make peace with their lives (I won’t go into those if you still have haven’t seen it because they are worth not spoiling; I even got giddy a lot and teared up so let’s just leave it at that).

The Thanos in the past eventually finds out about the Avengers plans and the Nebula from the past sneaks back to the future. As the Avengers get the stones together and decide who will wear the Gauntlet (keep in mind even Thanos arm was extremely injured from his snap), Nebula plots to bring her father and fleet over to the future for an attack. The Avengers are successful in that moment though to bring all living things back and with birds chirping and peoples phones ringing, the proof is inevitable.

In the brief moment of hope, Thanos launches an attack on the Avengers tower and they all pull together to stay alive. When rising from the ashes of the tower, it kind of looked like they were back on the planet where they fought Thanos in Infinity Wars. Thanos launches only a few missiles at the base, but it looked like a giant nuclear bomb exploded and the entire ground was turned rubble. This was way over-exaggerated in my opinion, but it was the final battle ground so they went for the dramatic effect.

Finally, the moment we were all waiting for, the Avengers are back together and everyone is back alive. A great amount of portals open thanks to Dr. Strange’s magic and we see all the heroes unit. Spider-man returns, Black Panther, Scarlet Witch, Bucky, etc. Then, with a great amount of cheesiness that we all love, Captain America stands in the front lines with thousands of heroes and calls out “Avengers Assemble.” The movie did a fair amount to include all characters and give them screen time and every hero has a moment for the most part. Through all the battling and war, they fight Thanos and try to defeat him. However, even without the Gauntlet, Thanos and overcoming the Avengers. He finally is able to steal the Gauntlet and even take down Captain Marvel for a moment. Different Avengers try to stop the finger from snapping again but then Tony Stark and Dr. Strange make eye contact. The good Dr puts up his hand showing the number one on his index finger. I that moment, Tony realizes he was meant to stay alive long enough to save the Universe from Thanos. Tony grabs the gauntlet and Thanos strikes him to the ground. With Thanos finally wearing the Gauntlet he snaps his fingers but quickly realizes all his stones are missing. Tony raises his right hand and reveals he had built an Iron Man Gauntlet to hold all the stones. Tony makes his snap and obliterates Thanos and all his forces, however we remember what happened to Thanos and Hulk, but Tony is simply just a human in a suit.

With everyone in aww about the defeated forced, they quickly notice Tony is down for the count. The movie did a nice parallel scene where Spider-man is the first to approach him and they have a moment together. Pepper sees Tony while wearing her suit and she has a calm talk with Tony. We all know Pepper has grown a lot during the years and encouraged him to return to the Avengers one last time, but all she did was shed a few tears and was strangely okay with Tony passing away the way he did.

The end of the movie had a decent wrap up. We got closure from all the heroes and we see them going back to their old lives and how its nice but its different now and the world has to deal with what has happened in the past 5 years. The Avengers are able to return the Infinity Stones back to exactly the point where they took them so the timelines don’t shift and all is well with the present. Tony has a nice funeral and we see a really cool shot of all the Avengers and other people we haven’t seen in a while at his funeral. The movie closes out with a nice ending.

ACTING: 10/10 / DIRECTING 8/10
The acting and directing are pretty much all on point after 10 years of making MCU movies.

OVERALL: 7/10
At the end of the day, it was a good movie but I liked Infinity Wars and Civil Wars better. The good news, no we can move on to Phase 4 of the MCU and start a whole new excitement for what’s to come. The story is what really killed it for me. I love the closure and millions of easter eggs put into this film. However, it fell short on delivering some impact to me. I never read the Civil War or Avengers comics to a point, but there were instances where the story became very obvious. There were also moments like Black Widow sacrificing herself or Tony dying, that didn’t really strike a punch to my emotions. In other words, it was very anticlimactic. Also, for a 3 hour movie its a bit of an oxymoron but the movie did feel to drag on in certain parts and felt rushed at times as well. I understand that to even make a movie with more than one protagonist is a challenge, let a lone having over ten characters that need to be focused on.

The next movie up is Spider-Man Far From Home, hitting theaters Tuesday, July 2. And here is the trailer to watch after seeing Endgame: