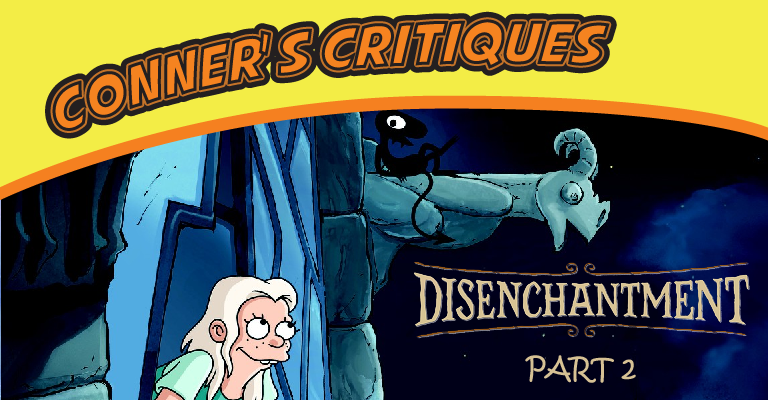 We are back at Conner’s Critiques with “Part Two” of Disenchantment. If you haven’t seen our prior review of Part 1, you can find that Here. So, because of how hard we hit down on Disenchantment last time, we are going to compare it’s prior scores during this review, while also touching down on our three categories: Story, Acting, and Overall. So lets begin.

I will warn though, that there is some minor SPOILERS, in this review.

STORY: 6/10
Last time around, we rated the story 4/10, We rated that higher primarily because of our love for Matt Groening, but now that we are into the second part, we’ve lost the bluster and luster that affected our prior review. This time around we rated it 6/10. There definitely was an improvement for the show. The characters felt more lived in, well most of them. King Zøg voiced by John DiMaggio seemed to slide back, losing all his progress in the prior season.

The thing that still prevented the show from soaring in this part though is the retcon in the beginning of Part 2, then they literally miss the point of the season. Sure they follow a story line with the Elves, and it’s a great story line, but they completely ignore the main story line for multiple episodes, so it feels disingenuous when it returns at the end of the season.

ACTING: 9/10
Last season we gave the acting 7/10 because the story didn’t lend anything to character development to help the actors in their work. I want to showcase the fact that it wasn’t the fault of the actors, in case it was not clear. This season though until the Elf story line, there was so much character development, and Bean felt like a much larger character. Additionally the journey to Hell was great fodder to build out the characters.

While King Zøg lost the character development of Part 1, Queen Oona developed so much amazingly. I fell in love with Oona, and felt like of all the characters, she was the most amazing one for the season.

OVERALL: 8/10
Jumping from a 6/10 all the way to 8/10, it was a clear improvement, but it still could be a lot better if they didn’t drop and pick up plot points like they wouldn’t exist in the background.

Conner’s Final Thought(s):
I think this is still a fun show to watch, but I don’t think I’d watch it again for a second time, like I do with Rick and Morty. I am interested to see if the next season will improve, similar to how the last season improved.