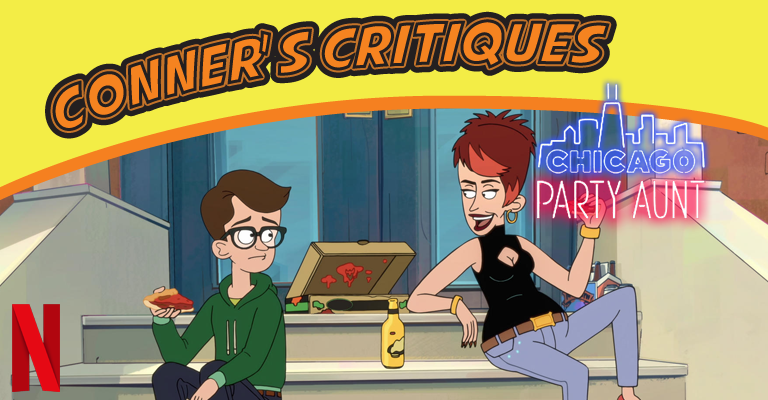 We love adult animation here at NNS, and frankly, whenever I get the chance to check out a new one, we jump at the chance. So when I heard of Chicago Party Aunt, I dove into this new animated show on Netflix.

STORY: 7/10
The basic premise between Chicago Party Aunt is about a woman who has been in arrested development for quite some time. Now in her later life, she is still living off her sister’s goodwill in her condo, doesn’t pay enough attention to her husband, and is incredibly laxadasical toward her employment. Then everything is turned upside down when her husband leaves, her sister wants to sell the condo out from underneath her, and her laid back boss is replaced with a stickler to the rules. When all seems at its worst, and she may have to move to an outer suburb of Illinois, her nephew convinces her to throw a party to say goodbye to her old life, much to the anger of her sister.

The party shows the nephew that his carefully planned life isn’t what he wants, and stands up to his mother. Seeing his son emboldened by his time with his aunt, she gives the Chicago Party Aunt another year in the condo, as long as the nephew can live with her.

The story is pretty fun, and as the season progresses it does get better and better.

ACTING: 8/10
The voice acting in this is very interesting, the Chicago Party Aunt is played by Lauren Ash who I loved on the show Superstore. I’m glad she is getting more work, and while she does a great job with this character, most of the characters are stereotypes and caricatures. They don’t really stand out as much outside of that at first. One exception of the cast in the series that I fell in love with the most was Gideon, played by RuPaul, the Chicago Party Aunt’s new boss. For whatever reason the show really dug into his life, showcasing his relationship with his mother, and I was genuinely interested in how they dealt with his forced coming out to his mother.

The season starts with him being a staunch figure, who is nonsense behavior, turns into a person who genuinely cares about the Chicago Party Aunt by the end of the season.

OVERALL: 7/10
It’s an interesting concept and is based upon a Twitter account that posts sayings and responses from the Chicago Party Aunt. What starts off as a raunchy and low brow comedy series finds some heart though by the end of the first season. However, this show is not a replacement for F Is For Family which is sadly finishing its final season shortly. I’ll be honest, this isn’t the best show that I’ve watched on Netflix this year, but I would definitely be interested in watching a second season, and see if they can keep growing the characters in a positive way following the season finale.

Conner’s Final Thought(s):
While this probably isn’t the best show that you can find on Netflix, as well as anywhere online at this current time, if you can make it past the first couple of episodes, the show does get much better, and the series becomes a lot of fun. Finally, the season finale is well worth watching through the short episode series.