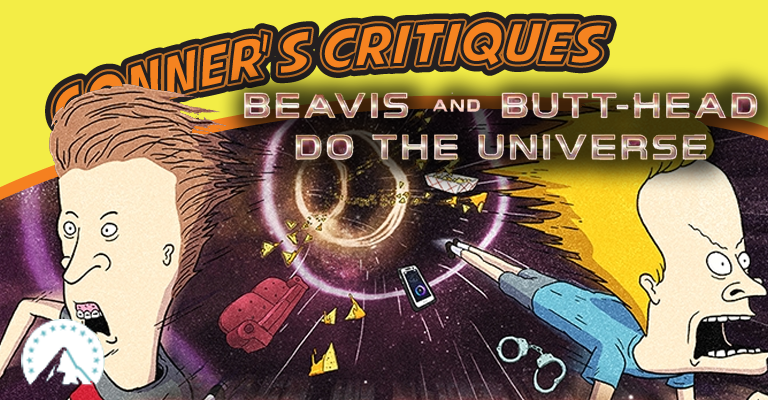 Growing up I was a huge fan of Beavis and Butthead. The series push the boundaries of what was acceptable on television, while at the same time creating an almost punk style for animation.

When we heard that there was going to be a new movie released streaming on Paramount Plus, and aping the name style of their much loved and amazing movie Beavis and Butthead Do America, we had to jump at the chance to review it.

As always all our reviews break down by story, acting, and overall. So let’s jump on in!

Completely disavowing the storyline in which Beavis and Butthead have been believed to be dead and leave their town to find a new purpose, the boys are doing what they normally do, disrupting the educational process of their Highland high school. Their teacher tries to goad them into being interested in the science fair with the coveted NASA Space Camp prize, but all the Butthead wants to do is kick Beavis in the nuts. Much to everyone’s chagrin, their antics lead to the destruction of the science fair. With the school and police frustrated with Beavis and Butthead, they are charged and found guilty of arson and while the judge normally would throw the book at them, due to his recent obsession with Touched By An Angel he tries a different tact and sentences Beavis and Butthead to space camp.

While at the camp, the boy’s singularly obsessed mindset and mentality interestingly becomes an asset to people at NASA and a wild decision is made to send the two on the next space mission to install a telescope to watch a black hole.

Unfortunately while in space an incident occurs that leads to the boys being jettisoned towards the black hole. However death is not the end for Beavis and Butthead, as being sucked into the black hole only transported them through time and space to 2022 Texas.

It’s from there that we get to see the boys’ normal antics as they tried to “score” their way through modern times, learning a lot along the way and not really understanding anything.

“If you’re a huge fan of the traditional style of Beavis and Butthead, not to mention their film Do America, then you’ll definitely find this movie to be enjoyable.”