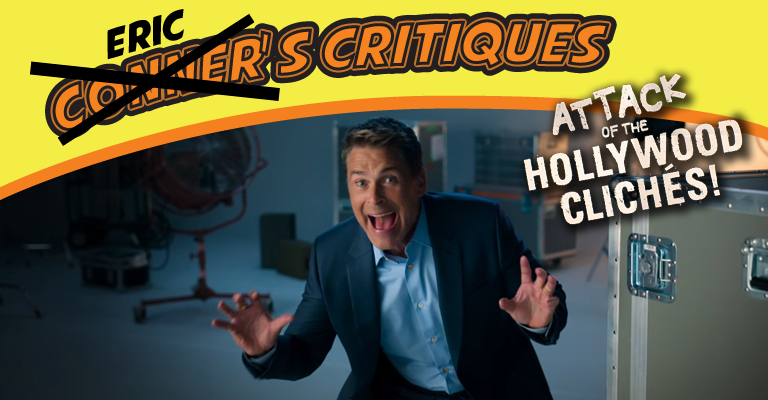 Attack of the Hollywood Clichés is an interesting idea. A documentary/discussion video similar to that what you would see in I Love The 90s on VH1, but instead of a decade, they talk about the tropes of movies that Hollywood just can’t seem to get rid of!

STORY: 8/10
This isn’t the first type of program that Netflix has made with this format, if you are a fan of history, then you should also check out our critique of The History of Swear Words. If you’ve seen that series on Netflix, you’d notice the format is very similar. That being said the format does fit very well in this piece and is used incredibly well to showcase humor and interest with the trope as well as the deep cuts into the histories behind them.

While I knew a lot of the topics they covered in the film, I can see how a lot of other people may not, and they even gave me some additional facts and information I wasn’t even aware of!

ACTING: 9/10
The host of the series is Rob Lowe, who is flanked by tons of stars and celebrities sharing their opinions, thoughts, and experience with the tropes. It really gives you a deeper look into the clichés of big and small budget films. Rob Lowe’s perfectly showcases his fake Rob Lowe super disconnected celebrity persona that he has tailored over the years, and it helps really nail a feeling of disconnect with celebrity and the real world. It comes off fun though, and not insulting. Hell, the Hollywood celebrity is a cliché in its own right.

OVERALL: 8.5/10
While this movie is less a documentary and more an instructional guide that references the history of the tropes, if you are a fan of movies, a film student, or even if you are someone who just wants to poke fun at Hollywood, then I would definitely recommend checking out this film.

Conner Eric’s Final Thought(s):
While watching this film, I got a real, The Invention Of Lying vibe, which Rob Lowe also starred in. It was probably due to the fact that movies in the world of that film were just a person standing in a room talking about history. It wouldn’t be so bleak of reality though, as long as it’s Rob Lowe delivering the facts!