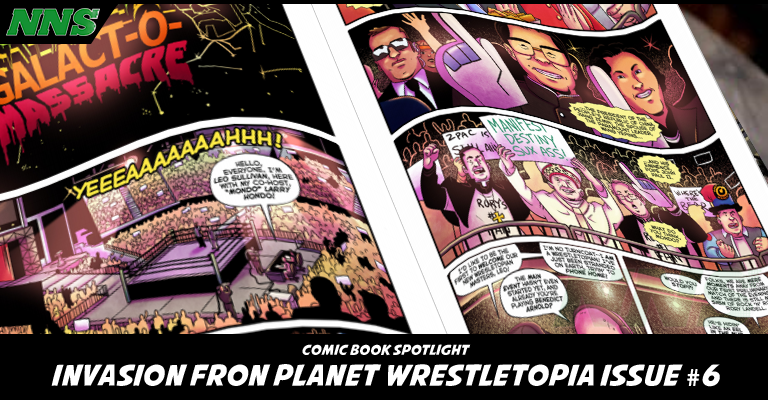 Let’s get ready to ruuuuummmmbbblllleeeeee! Welcome back everybody and thanks for keeping up with me on this sci-fi wrestling adventure. If you need to play some catch up, you can find my preview review and my previous reviews for the first, second, third, fourth, and fifth review Here! The last issue in this series is a whopping 47 pages long, which is double the length of the previous comics. So grab some snacks and get settled in as we find out who the true galactic champion of the universe is! Last we left off, Don deflected Dominatress from attacking our brawny friend Rory. With a cliffhanger ending, it’s time to dive right back in and finish this story….

The story begins with the opening promo of the most highly anticipated match that has been building up since our own “Rock and Roll” Rory Landell declared himself the” galactic champion of the universe”. Now if you have ever watched a WWE or WWF event on TV, or been lucky enough to go to on, then you know how the scene will look: thousands of fans with homemade signs cheering for their favorite wrestler. It’s replicated to perfection in this introduction, including some special guests like Bill and Hillary Clinton, Pope John Paul II, and various other world leaders. Keep in mind, we are still in the 90s and props to the creative team once again for maintaining some historical accuracy!

In the 15 years that has elapsed since the first issue, Rory has been to hell and back. Losing his manager/friend, betrayed by his lady friend who turns out was working for the other side, and above all being constantly attacked by alien wrestlers. Give this guy a damn beer already! With a little more help with his remaining friends, he escapes the clutches of Dominatress and is ready to go kick some alien ass!

Back to the match, tension and anticipation is rising…..will “Rock and Roll” Rory Landell shows up and shows Manifest Destiny who the real boss of Earth is? To everyone’s shock and awe, and in true wrestling surprise fashion, he does just that. The most epic of matches occurs! With some heavy exaggeration and a dash of dramatic flair, Rory and Manifest kick off the match. The fate of Earth rests in Rory’s hands so you know, no pressure or anything. With a kick here and a pin for submission there, this match is like no other that has been seen by anyone, human or alien! There is a scene in the comic where Rory once again has one of his famous dream-like visions (being choked into unconsciousness will do that to you sometimes) and he sees Don again. It brought a little tear to my eyes as we see these lifelong partners in crime reunite in a paradise known to them. He shakes off his vision and finishes the match! Although by a technicality Manifest wins the match by pinfall, he offers a consolation to Rory and the humans of earth: He will remain the galactic champion of the universe, but will leave Earth alone. He admires Rory for his strength and all he really wants to do is take his alien army with him to go home. The story ends with Rory and Linda kissing and with some wondering: Who is the ruler of Earth now?

Of course stuff happened in between, but you gotta read for yourself! You can pick up your copy Here, along with the rest of the saga!

We did it guys! Our first full series review together, and I had so much fun with this! Be on the lookout for my next comic reviews which you can always find right here! See you all on the flipside and remember: You all are the galactic champions of the world!