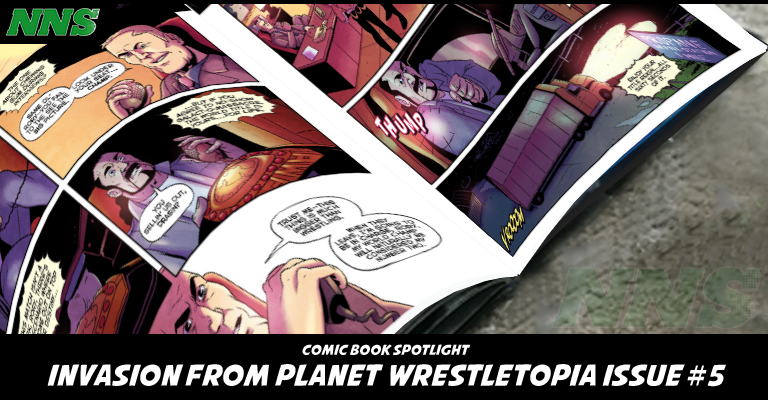 Lets get ready to ruuuuummmmbbblllleeeeee! Welcome back everybody and thanks for keeping up with me on this sci-fi wrestling adventure. If you need to play some catch up, you can find my preview review and my previous reviews for the first, second, third, and fourth review Here! We are almost at the end of Rory’s journey, and soon we will find out who is the true galactic champion of the universe…..

Last we left off, Rory hitched a ride from a seemingly normal truck driver, only for it to be revealed as a trap! Drasin speaks to him and offers him an out of this world deal: agree to be his right hand man when the Wrestletopians give him complete control of Earth, and in return Rory will retain the galactic championship for life. The catch? Don’t show up to the match. Now if this were Rory from issue #1 of this series, then I can only assume that he would agree in a heartbeat. In his typical fashion, he blows Drasin off with a sarcastic joke and is able to escape with some scratches and bruises.

Meanwhile, Drasin and the Wrestletopians are aware that Rory has gone missing and must find him. They send Dominatress, who reminds me of an alien Betty Page without the 40’s bumper bangs. You definitely don’t want her to be looking for you! Look out Landell……

Rory encounters a familiar face who is revealed to be Don’s former competitor: Jay Warcloud. He is offered a sandwich from Jay and before we know it, we see Rory having one hell of a ride down his subconscious thanks to the peyote that was in the snack (that isn’t smiling back). The vision reveals to be a wrestling match that’s painfully interactive with Rory. Before he is throttled back into reality, he sees his dad in the ring with him. Could this be some foreshadowing for what’s to come….? The last scene we read is Don, Linda, and the vintage wrestling gang save Rory (yet again) as we see Dominatress leap into the air to attack Rory with Don leaping in front to deflect her. Man, can’t our wrestling friends catch a break?!

I have to say, I give major props to the creative team behind this series. I appreciate all of the subtle nods to modern day WWE, and as it was branded previously the WWF. I have gotten attached to these unconventional characters and that’s how I know that a comic is well written and drawn: feeling a connection to people that don’t exist in real life. Tune in next time as we read the grand finale of the series and witness the colossal wrestling match that the whole universe is waiting for!

If you’d like to pick up the series for yourself, you can do so Here!