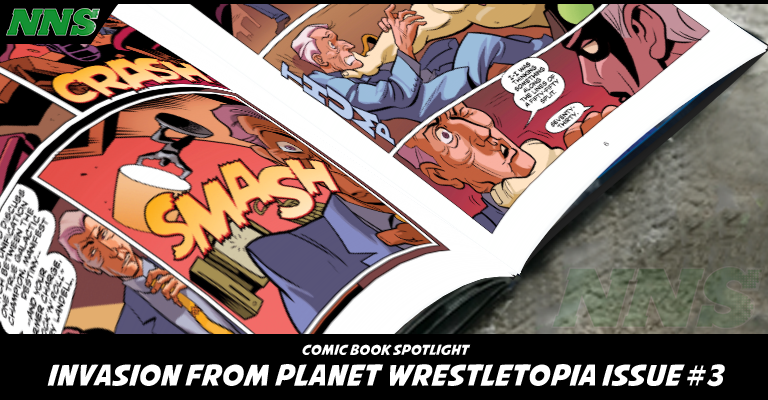 Lets get ready to ruuuuummmmbbblllleeeeee! Welcome back everybody and thanks for keeping up with me on this sci-fi wrestling adventure. If you need to play some catch up, you can find my preview review, my first issue review, and my second issue reviews here!

As a quick recap, alien wrestlers from the planet Wrestletopia have trapped Earth in a steel cage and invaded every country. Manifest Destiny, aka the galactic ruler of Wrestletopia, is on the hunt for Rory Landell, the egotistic AWF wrestler who very early on in the series affirmed that he was the galactic champion. I guess this universe isn’t big enough for two galactic champions!

The story begins in the office of Dick Drasin, Rory’s ex-boss and head of the AWF, when suddenly Manifest Destiny storms in with a small alien entourage. He demands to know where Rory is and want to have the ultimate out of this world, never seen before match. Its hard to believe this but 15 years has passed since the first issue. It’s 1994 now and what seems like an impossible mission to some, the potential mass amount of pay- per views and profit he will make from this match makes Dick agrees to find Rory.

Meanwhile, back in Arizona, Rory is ambushed by more alien wrestlers and is saved by Don, his ex-manager who definitely looks 15 years older with his grey hair and aged face, and Mini Macho who was last introduced in the second issue. Though he be but little, he is fierce! They drive away and escape in the nick of time before Rory becomes no more-y (sorry not sorry for the pun). All around the world, leaders desperately offer up their own champions to compete against Manifest Destiny. Will these sacrificial honors be enough to save the planet?? Or will His Championess settle for no less than “Rock and Roll” Rory Landell…..?

Later in the comic, it has also been revealed by an advisor of Manifest that: in the case that Dick cannot find Rory to compete, the number one contender will take his place! His name is “Sunny” Jim Cooley, the “Peach Blossom Playboy”, and boy oh boy did the writers and artists do an amazing job creating this character! He literally is the definition of cheesy and his tagline is the absolute corniest….my millennial just can’t even.

If you wanna read the rest, pick it up Here! The suspense is starting to kill me! There is so much hype and buildup to this otherworldly match and I for one cannot wait to see who will bbe crowned the true galactic champion.

As always, thank you guys for coming with me on this kooky adventure we are having! I’ll see you all on the flipside and for the next issue review.