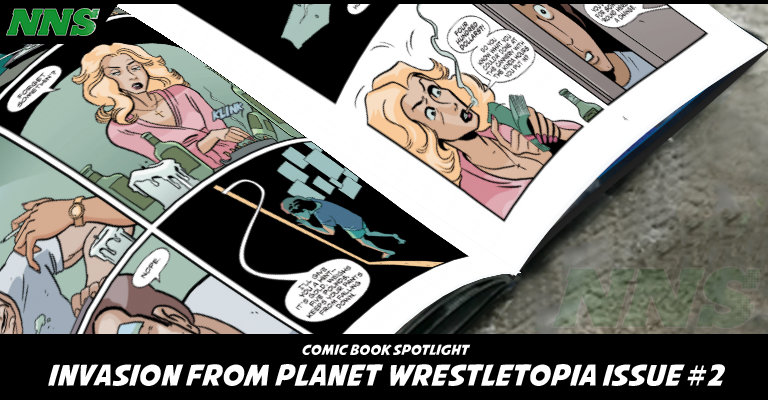 Lets get ready to ruuuuummmmbbblllleeeeee! Welcome back everybody and thanks for keeping up with me on this sci-fi wrestling adventure. If you need to catch up, you can find my preview review and my first issue review Here!

Last we read, our “galactic champion” Rory Landell made an out of this world declaration that transmitted all the way to Wrestletopia, a planet of alien wrestlers who don’t take too kindly to a mere human making these false claims…..

It begins with a dreamlike flashback that Rory is having, of his mother and father having an intense argument over money. Turns out, his own dad was an AWF wrestler who suffered the same fate as Rory did: a championship title promised to him, only to be changed the same night of the event. The dream disturbs him and he suddenly awakes in a panic. We find him in a desert landscape, aka Arizona. The next scene jumps to scientists in an observatory that discover unidentified spacecraft building a cage around Earth. It definitely reminded me of when wrestlers fight in cage matches, which is making me love how much real life wrestling has influenced this story! Strange things are starting to happen, and its about to get stranger when we see a morning show broadcast be interrupted by no other than His Championess, the ruler of this alien planet. When he was first addressed by this name in the first issue, it stuck with me. And he isn’t alone! Hordes of alien wrestlers invade every part of Earth, attacking anyone and everyone searching for the imposter who dare call himself the “galactic champion”. They will not stop until they find Rory……

Wanna read more? Get your copy Here! This series has been keeping me entertained through quarantine, and I highly recommend to readers aged 13 and up to enjoy. Every bit of it has been enjoyable so far, from the detailed colored art to the witty dialogue.

Thanks for riding with me on this wacky adventure! Join me next time as I cover the third issue!