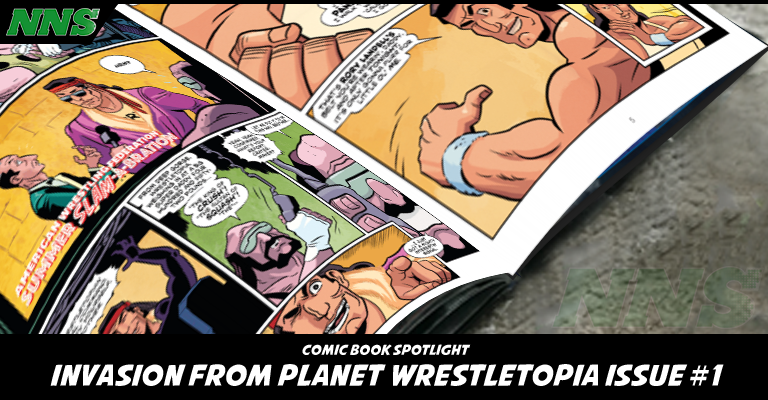 Lets get ready to ruuuuummmmbbblllleeeeee! Hey guys, I know its been a hot minute since my exclusive preview review but I am back and ready to dive in to the first issue of Invasion from Planet WrestleTopia! Fun fact about yours truly: Besides being a comic book lover and horror movie fanatic, I have been obsessed with the WWE Universe ever since my partner and I started dating.

Written by Ed Kuehnel and Matt Entin, these two took us on a wild sci-fi adventure through vintage wrestling. And with the help of artist Dan Schkade, the story comes to life with its vivid colors and images. I do recommend this to readers aged 13 and up, and if you wanna read them for yourself, click here!

Before the story begins, there is a bible verse that seems to foreshadow what is about to happen and give us a deeper sense of context for what we are about to read (Ephesians 6:12-14). Set up against a black and purple background, which looks like a galaxy, it reminded me of when films/tv shows open with a quote/opening line that helps the reader/viewer comprehend what they are about to see.

Set in 1984, in a world full of mullets and John Hughes films, we are introduced to Rory Landell, an AWF superstar who is full of ego and muscle. On the night of his main event, he is told last minute by Dick Drasin, who would be comparable to WWE’s very own Vince McMahon, that his opponent Bob Schultz is keeping the strap. Meaning, he gets to retain his championship. This doesn’t sit too well with Randy, who argues that the fans tune in to watch him. Drasin bluntly tells him that because the ratings were up and Schultz is more family friendly, this was the final decision. After angrily grabbing Drasin’s wrist and saying, “Brother, I am the show”, (hello Hulk Hogan reference) he is confronted by his manager/trainer Don Fong Wong and dragged back to the locker room. Personally he is my favorite character! His colorful language and rugged down to earth persona makes him likeable and fun to watch.

Jumping to the night of the event, where sports journalists are interviewing Rory before he appears and recites a speech written by the show’s writers, when they ask him about how he felt about his last match with Schultz. Before the journalist finishes his question, Rory replies with an outburst of defensive dialogue, claiming that the AWF championship means nothing after all. He then labels himself, “the new galactic champion of the universe”. It wasn’t just AWF fans and families listening to this declaration of cockiness……far far away, in another galaxy unlike any we have seen before….the planet of Wrestletopia receives this distressing signal. His Championess, assumed ruler of this planet, is ready to meet this imposter and Rory better be ready, because he is about to have the match of his life!!

Want to read more? Pick up a copy Here! Be on the lookout for my next review from this series!