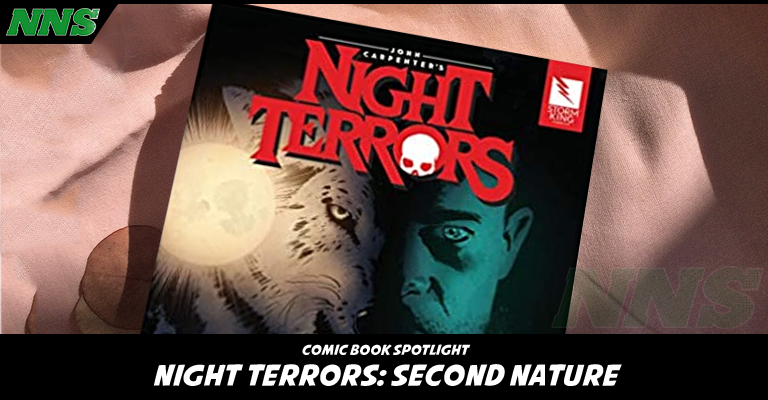 We’ve covered Storm King comics in the past, and we’ve covered Dennis Calero before as well. We won’t lie, we love both a lot. Storm King, and specifically Sandy King, have given so many independent comics a home and their creators a place in which to share their stories.

This is a 100+ page one-off comic and as a result, we are going to be very careful to not let any spoilers slip so that readers can enjoy the adventure of reading Calero’s work.

I will specifically say that while this comic builds an interesting world, it is completely concluded in the end, with the story concluded, and no real need for another issue to follow up down the line.

The story picks up with Detective Cutler being forced by his Chief to return to his hometown, an Indian reserve, to help a Federal Agent investigate a murder near the quiet Rhode Island town, that is similar to a murder on the West Coast.

However, this small town has a shared secret that begins with the fact that most of the people living on the Reservation aren’t Native Americans. The Federal Agent, Angela Hernadez, specifically was assigned the case due to the questionable animal bites among the deceased. While some of the bites look like animals, other parts look human.

But what could be part animal and part man? Detective Cutler knows, and he is torn between protecting his people in a town that forced him away, and his duty to uphold the law.

I’m just going to say it. It’s not a spoiler, Calero mentions it in his letter upfront. Werewolves. If you like werewolves, they take on the association with the Native American Reservation was a really good touch, but I would have liked to see a little more connection to the community, other than the fact that Werewolves also form tribes.

That being said, the story, for its 100+ pages, doesn’t waste its pages. It tells a solid story and gets you through the mystery of what happened in this sleepy, but a secretly dangerous community.

The conclusion of the story was not exactly unseen, as it approached, by us. We consider ourselves as very clever, so I can’t honestly say that everyone will see it coming, it’s not completely telegraphed, but it is highly alluded to within the story in so many ways. That being said knowing it was coming, did not specifically take from the beauty of its conclusion.

In the end, the story is about building a home, and the past coming back to bite you, literally.

This comic is out today, and if you want to pick it up you can do so Here!