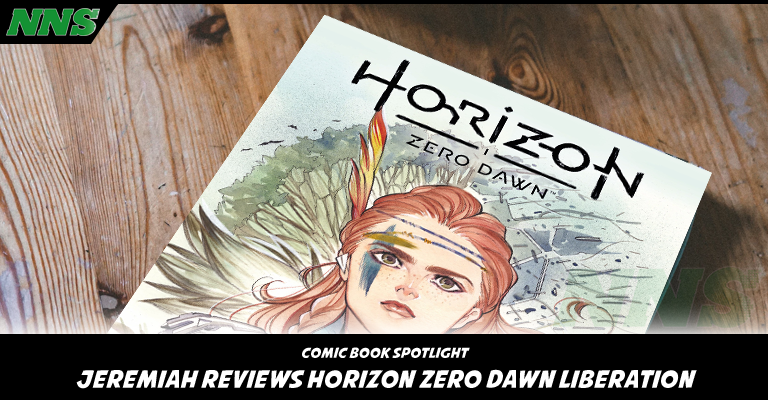 I don’t know much of Titan comics, but they have licenses for so of my favorite fandoms (Assassin’s Creed, Doctor Who, and Heroes). They also have comics based off various video games such as Devil May Cry, Life is Strange, Bloodborne, Dark Souls, and Horizon Zero Dawn.

Horizon Zero Dawn: Liberation is based on the Horizon Zero Dawn video game that takes place a thousand years after a global cataclysm, where a new dominant species called the machines roam the world. The animal-like robots roam serve as guardians of the new natural order. While the humans of the world live in pre-industrial tribes without knowledge of the world that came before. The main Character of the game Aloy, is a machine hunter on her own quest to find answers to why her tribe was attacked and she specifically was targeted.

The first issues of this new series takes place during events of the video game in a kind of grey area before Aloy heads to Meridian; however, the story uses these moments as a springboard into the past, to give more backstory to the events that are taking place.

While the main character Aloy and Erend Vanguardsman pursue Korl, an Oseram terrorist that was involved in the death of Erend’s sister. Erend recounts what happened to his sister and the history of what has lead them to this point. The story jumps back and forth from past to present during the pursuit and the story being told in the past.

As a fan of the game I enjoyed the comic, learning more about the history and events that aren’t and can’t be fully covered in detail in the game. There is a nice mix of humor and action through the two issues.

I really enjoy the detail card about a specific machine that appears in the comic and how there is a style change in the artwork when it goes into the past, although that part doesn’t continue in the second issue. The story is compelling and the end of the first issue has one of my favorite parts. Without spoiling anything, I’ll just say Erend’s sister could have her own game or comic.

If you are a fan of Horizon Zero Dawn or were interested in it, but couldn’t play the game for whatever reason this is a good introduction to the world of Horizon without any major spoilers to game. I would recommend picking it up.