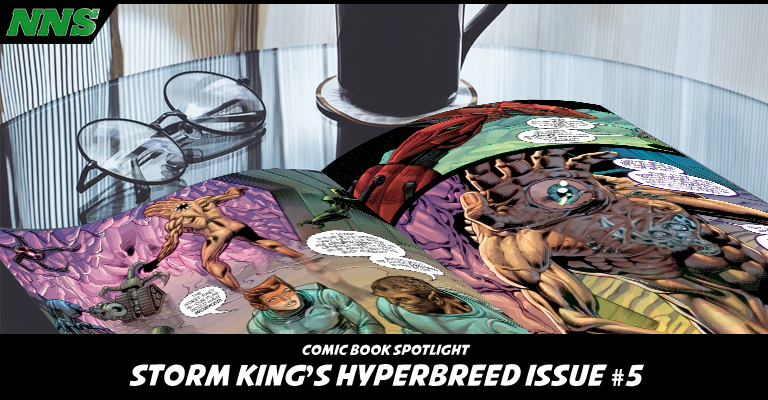 Hey, folks! We’ve reached the fifth issue of Hyperbreed! The great folks over at Storm King provided us with these issues and you can find my other reviews for the series Here, Here, Here, and Here.

So, here we are! Last of the issues we have for review! How does it compare to the prior four? Do our heroes get a happy ending? Or are these fuzzy folks headed to the pound?

Spoilers ahead, obviously. Considering this is the culmination of the five-issue arc, we have to cover a little ground from the prior four issues.

When last we left our crew, they’d managed to gather Yik Void – a multi-part chemical solution to void their Yik infested freighter of the crystals that have it grounded. Partway through this process, the Mak show up and capture Fext, Byyr, Cammo and Boomer. The horrendous-looking leader of these Mak, Eye-5, manages to lead in his forces and subdue our Splices, and in the process let them know exactly how deep the trouble they’re in actually is; sold out by their creators, written off and presumed dead. No-one is going to be looking for them, leaving them entirely at the mercy of the scavenger, space pirate race.

So, having learned that they’re effectively cut loose with no allies anywhere and in danger of a messy end, what can even be done?

Turns out? Plenty. But it’s a race against time with some serious stakes – get free, destroy the Mak, save the earth and try to get some kind of retribution. Because, with the knowledge of Earth that these three possess, the Mak could do some serious, serious damage to the planet they were created on.

Considering how Earth has treated them, though? Does it even deserve saving from their point of view?

Yeah. Fext has a predisposition towards saving humans – she’s rescued miners from collapsed shafts and the like. The other two are happy enough to go along with her in the end. These are good people.

They come up with a plan that takes special advantage of all of their inbuilt animal abilities. Fext can compress her body to slip through tight spaces. Cammo can completely disappear. Byyr…. smash. You might notice I’ve stopped mentioning Boomer and yeah, it’s time to address the elephant in the room. (Sorry, not sorry.) He didn’t get to escape with the other three. Eye-5 absorbed the plucky little elephant Splice into itself. (Remember that messy end I mentioned at the start of this section? That’s it. That’s the messy end. Absorption of body and mind.)

Unfortunately, they each have only eight minutes worth of breathable air in those ancient space suits they managed to wrangle up in the last chapter. Will they be able to make the best possible use of that amount of time?

You’ll have to read to find out.

This has been a fantastic story from start to finish. The universe as presented is vast and interesting while we take the time to read about a complex set of characters in a simple narrative. It has everything I need to feel satisfied in a comic story; fun action, visually appealing character design, high stakes on a personal level as well as in the grander scheme of things and, a must-have, heart. This crew of misfits works together builds one another up, can each do something different and they get to use all of that to their advantage and the betterment of their situation.

The Mak are some of the most interesting bad guys I’ve come across in a long while. Their cyborg, junkyard dog, survival of the fittest society is a wonderful, refreshing contrast to so many other, more generic, and homogeneous bad guys. These aren’t Storm Troopers or the Borg. These are Sid’s toys from Toy Story but evil. And with a biological element. So… if Sid and Doctor Moreau teamed up. In space.

The plot itself is simple enough but done in a way that’s consistently engaging. Again, this mostly comes down to the characters and the parameters of this world. I’m hoping we get to see more of these characters or this world over time. I genuinely hope this book does really well and there are many more Hyperbreed stories to come.

You can purchase the paperback Here!