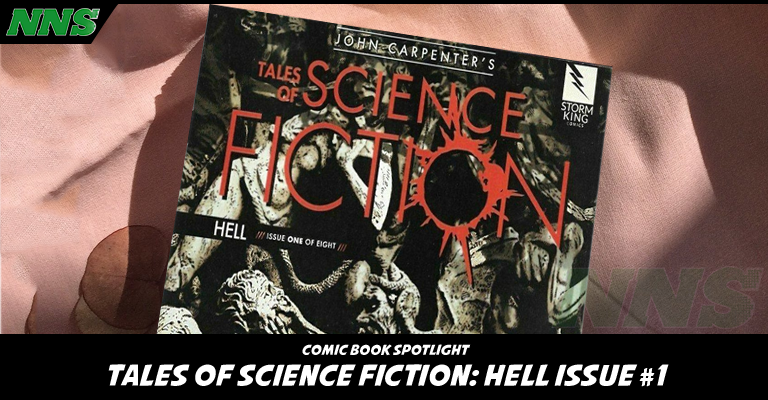 Hello! It’s time for the Comics Round-Up, but I thought with the holiday upon us, you’d probably prefer a comic review to get you in the mood for some horror or suspense stories, with the holiday only 11 days away! With that in mind, I am checking out Storm King’s supernatural series, Hell in John Carpenter’s Tales of Science Fiction line-up. This series deals with the realization that not only is Hell real, but it’s a place much closer to us then we ever thought before. The first issue is all setup, so if you think any of my comments are spoilers, well that’s on you!

So lets jump into the first of eight on this comic book, and I’ll continue on through the series for the remainder at a later time!

There isn’t a lot of information to take from the first episode, as instead of world building, they focus more primarily on the characters within the world. As this is almost like an adventure/heist film the team is the part that is really important. Especially if they start to get picked off. You need to know who they are before you can even miss them when they are gone.

The show does this by giving almost every character a little introduction segment, albeit small, via the books narrator Stephanie Billings, an Occult Specialist for the group. In the group, there is a Geologist, Dr. Jordan Correll, who supposedly escapes hell with a mineral named Vidrauxite. Convicted murderer, Marion Marshall Dix, who due to his ingenuity has escaped hell before, and will serve as a guide. A mysterious lizard humanoid known as Kartkas who has yet to be shown to have a reason for being in the group. Captain Lamb, the over prepared soldier with the guns, and the tech that they’ll need. All backed by a shadow corporation that appears to know a lot more then they are sharing with the class.

The last member of the team is Brandon Samples, he is a trouble shooter, and the only one who isn’t given a backstory yet. I imagine it will be because of the hinted past that he shares with Billings. They are likely sharing the story of the events that led to the falling out for a more important moment in the story.

So what is this crew doing? They are entering a steam vent that showed up within the Bermuda Triangle, so they can get in, and get out of Hell before the vent seals back up. Their purpose, likely Vidrauxite. As to why, and what it does, they haven’t shared yet.

As far as the assembly story for a heist, this book does a good job. While I’m not a huge fan of the whole, where should we start the story at trope, it’s well played as a quick in and out for the comic book to lend a quick snippet of history for the parties involved. As to what happens going forward though, the story hasn’t done a great job so far getting me intrigued. I’ve read quite a few Storm King comic’s though, so I’m willing to give the series a try and check out the second comic before I write off the limited run series.

It appears to have progress, and I genuinely want to know who Kartkas is, what Billings and Samples’ history is, and what is Vidrauxite, and what does it do.

I guess we’ll all have to read more to find out.

You can pick up the first issue Here or the whole collection in one paperback via pre-order Here, releasing in early April 2022!