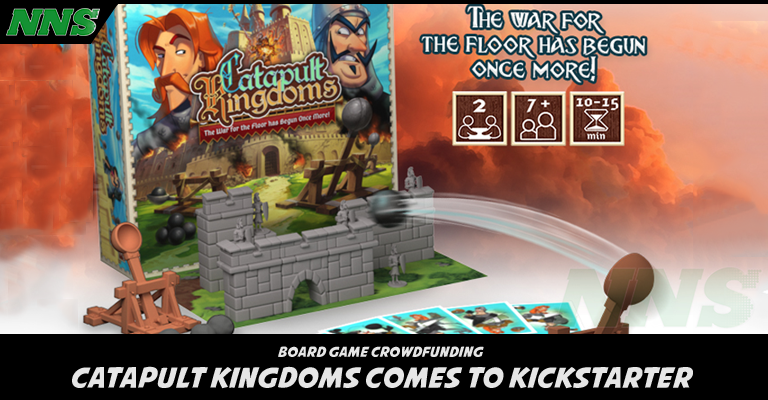 We’ve covered a couple of Vesuvius Media’s games prior, and when we heard about their new title coming out on July 2nd, we wanted to share it with you guys!

Catapult Kingdoms, designed by Kristian Fosh, reminds us a tiny bit like a mixture of Kubb, a Scandinavian lawn battle game where you throw batons to destroy towers, and Angry Birds.

This game has lots of benefits for children, as it will help them with resource management, spatial awareness, and rudimentary physics.

In the game, players are given a limited hand of cards. Five total, and no drawing back up. Once a card is done, it’s done. While this means that the options of when to use them is limited, it also means that they will have to learn the most opportune times to apply the benefits of the card.

Next they get to aim and use their catapult specifically for the purpose of knocking down the troops of their opponent, or anything, castle walls, blocking their ability to knock over the troops. This means that they are going to have to plan out their shots, and aim specifically to do the most damage, and make every shot count. The player will have to do that because their opponent is trying to do the exact same thing!

The last thing the game teaches is rudimentary physics, forcing the player, likely a child to understand that the level of energy that they place upon the catapult, will produce energy in response. The players will learn to adjust the power, to launch that rubber boulder where their enemy had placed their troops.

So, now that we talked about the benefits for your junior gamer, what do we specifically think about this game?

I personally think that some of the coolest games that I personally played as a child were games with a physical component. There was something satisfying about placing a pin in a board and hearing your friend get frustrated when you sunk their Battleship. Placing real-life components in children’s hands teaches these education concepts in a more positive way, then a book ever would.

You can follow the links from Vesuvius Media, Here, to head to the Kickstarter when it launches on July 2nd 2020, and pledge to pick up the game for only $35, which will include stretch goals, but if you pledge $60 you will get the deluxe version of the game and the siege expansion.