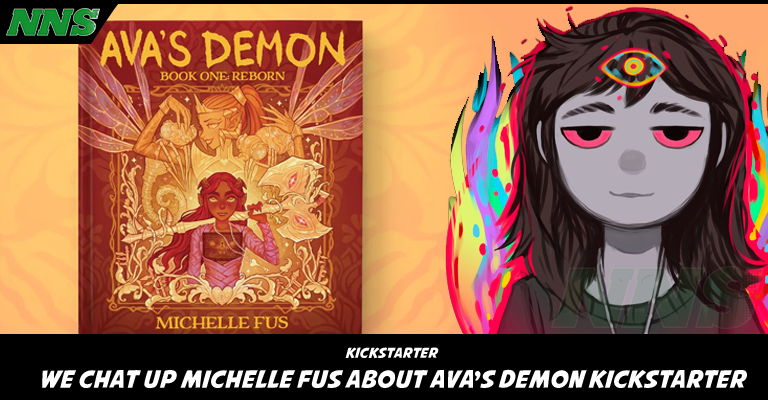 Earlier in the month, we talked to you about Ava’s Demon heading to Kickstarter, find that article Here, but we decided to dive further!

We were lucky enough to steal a couple minutes with Michelle Czajkowski Fus to talk about her webcomic, her book, and Kickstarter, let’s dive in!

Eric Bryan Seuthe II: First and foremost thank you for taking the time to talk with us about your Kickstarter.

Michelle Czajkowski Fus: Really excited to talk with you as well!

Eric: Your small panel style of your webcomic is amazing, and conveys a lot in such little space, what drove you to design and release it in this format?

Michelle: Originally, you would read it on my webcomic website in a format that lets you read it only one panel at a time. This way you can view it in a seamless storyboard-like movie, with parts of some of the panels flowing in a way that looks animated. I figured the storyboard-like format would let me tell the story in as many ways as possible in the foreseeable future, since single panels themselves are the bare bones of many formats, including the more traditional comic book format I’ve recently made with Skybound.

Eric: What made you decide to release the print version of your webcomic through Kickstarter?

Michelle: I didn’t really decide to release it this way, it is just the best way to release indie content these days. It seems that Kickstarter is one of the most democratic and efficient ways to release new ideas into the world since bigger companies do not want to take risks if they feel something will not sell. Through Kickstarter, patrons can vote with their money on whether something is created, rather than having a middleman decide the fate of a project. In this way you also do not need millions of patrons to succeed, only hundreds or thousands, patrons whose voices are equally relevant and important on what kind of content this world needs.

Eric: What drove you to break your webcomic up into chapters, and then of course a book?

Michelle: Chapters were more for separating parts of the comic every 100 panels or so, the fans took it upon themselves to name each chapter, and they did a great and memorable job with it. I’ve always wanted to make the entirety of the comic into a book, but when starting the comic, was unsure it would happen, and so I purposely focused on making single-panel illustrations in hopes of arranging it the way that I have with Skybound.

Eric: With of course the book being titled “Book One: Reborn”, it’s clear you have further plans. Care to share with us what those plans are?

Michelle: I have an entire outline of the story created, and I would like to make a series of books for as long as I can. Ideally, my idea was supposed to be divided into seven books to pair with the running theme of the Seven Deadly Sins, but it’s unclear how many I will make at this time.

Michelle: I’m not sure how this will affect publishing schedules, but after this book I plan on doing my best to get as much done of the comic as possible within the next few years, and hopefully completing it within five. It might mean hiring more colorists on my end, I’m not sure, It’s tough to tell, I’ll have to take it one day at a time, but I plan on doing my best to finish it for books in a timely manner.

Eric: We here at Nerd News Social are huge fans of webcomics, and find them to be a great weekly addiction to help us relax. Are there any webcomics that you read to help you unwind?

Michelle: I haven’t read many comics in a while, it’s really sad, but I mostly read books, horror and scifi novels, with some history and politics thrown in. It’s easier for me to consume audio books while I work, and I work a lot these days. I like stories and things that keep me intrigued. Apologies if this is a bit disappointing. A recent book I really liked was “I’m Thinking of Ending Things” by Charlie Kaufman and less recently “Sharp Objects” by Gillian Flynn.

Eric: Thanks again, and I thank you for your time!

Michelle: Thanks for talking with me! Always a pleasure.