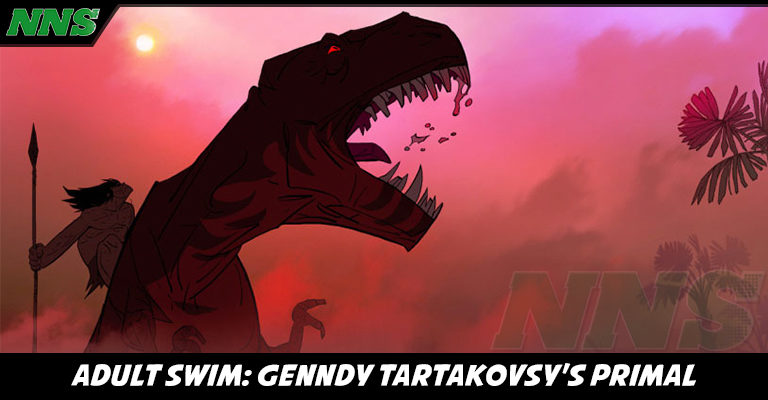 Once again, Nerd News Social killed it at the convention this year! We have put out all kinds of media posts throughout the convention but we still have a lot more posts to come! Over at Adult Swim there was a special screening event for Genndy Tartakovsy’s newest show Primal. For those of you who don’t know Genndy, you actually do. He is an animator, director, producer, screenwriter, storyboard artist, comic book writer and artist. He is the creator of the Cartoon Network animated television series Dexter’s Laboratory, Samurai Jack, and Star Wars: Clone Wars. Other notable properties he’s worked on are Hotel Transylvania 2-3, Power Puff Girls, Cow and Chicken, Batman: The Animated Series, Tiny Toon Adventures, The Grim Adventures of Billy & Mandy, and the list goes on! See, I told you that you know him.

Well, you should be very excited to know that his new series Primal is TOTALLY AMAZING! We were able to watch the first episode. It’s stylized very Samurai Jack and the first episode…. It didn’t have any words but had so much emotion! Primal features a caveman at the dawn of evolution. A dinosaur on the brink of extinction. Bonded by tragedy, this unlikely friendship becomes the only hope of survival in a violent, primordial world.

Below is a trailer, be aware that this is a show for adults due to the gore and murder. AND WE LOVE IT! Primal will premiere this fall.