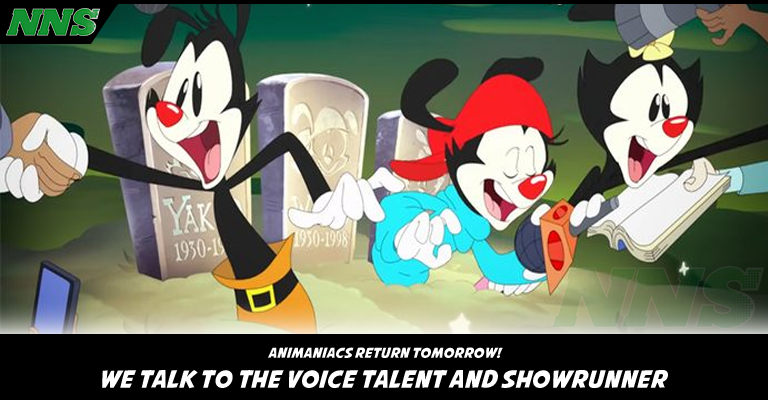 With the recent return of Animaniacs coming to Hulu on the 20th, we had the opportunity to interview the incredible talent behind the production of the old, beloved, and zany animated series: Animaniacs. We even got the chance to chat with Wellesley Wild and Gabe Swarr. They are a huge part of the reason for this comeback, and we thank them profusely. According to the cast, there were several attempts to recreate this masterpiece over the years, but they declined. At the time, the cast felt that the people who would be in charge were not the best fit.

Twenty-two years later, we finally have a solution to that! Jess Harnell, Maurice LaMarche, and Rob Paulsen talk to us about how they have come together with Gabe and Wellesley to bless our 2020 with a revival! The new series will feature the original voices for not only our favorite TV siblings but also we’ll see the return of the only lab mice to ever get inches from world domination.

While many of us enjoyed this shrine to our childhood or was difficult to share this with our own kids, thanks to the nature of the jokes being so topical.

At this round table discussion, we find out that the new episodes will be geared toward drawing in a new audience of younger viewers, as well as continuing to entertain the existing older fanbase.

Monica Scott: I know the original theme song, had Bill Clinton references, and the modern president at that time. You say you traced over the scenes for the intro. I am imagining you replaced Clinton with someone else?

Gabe Swarr: In the opening in specific, we don’t have a presidential reference, unfortunately. The scenes that are the same, we tried to keep them exactly the same. In general, Welles can talk more about the writing.

Wellesley Wild: It was really looking at it through the construct that they had created so well, and just applying the elements of the original. The satire, the self-awareness, the meta-humor, musical comedy, and just updating it.

Monica: In the prior show there were more push jokes on the politics of the time. Is there going to be something in Trump’s era, or will you be staying away from the craziness that’s out there?

Wellesley Wild: We dove right in. Trump is almost satire proof because he is his own satire, he is so ridiculous. We took some jabs, but it felt tired pretty quickly. Sure there is some stuff in there that is Trumpian. We didn’t make a meal out of it. We weren’t trying to take him down. He took himself down. It’s too obvious, too easy. But there is definitely enough in there.

Monica: With the COVID-19 thing going around right now…

Monica: How did that production start, and how difficult was it in recreating this shrine to our childhood?

Jess Harnell: I love the shrine to our childhood thing Monica, that’s a cool way to put it. The COVID thing really reared it’s ugly head after we had finished the primary recording. The funny thing for me is that I’m actually in the Guinness Book of World Records for having the worst technology that ever lived. So I had a couple noticeable sessions in my closet trying to figure out how to do ADR, which is where you replace dialog to go with the picture so that was a trainwreck, but other than that it’s been a groove. It’s just the technical side of things leaves me a bit flummoxed sometimes.

Rob Paulsen: It’s actually kind of surprised me in a loving way, the truth is I prefer to be in the studio. I love being around everyone else. It makes me better. And these are the people you choose to spend your free time with. It is the coolest gig in the world. The fact is we couldn’t have pulled this 25 years ago. It feels like everything, with respect to Pinky and the Brain and Animaniacs… honestly Monica, it feels like it’s meant to be. Everything, even from the beginning, when Wellesley would come and say “How are people liking it?” Hey Gabe, “What do you think?” The thing was, people were freaked out because no one had a problem with anything. “Everybody thinks it’s working.” “Well, what are the notes?” “No notes.” “What?” “I know right?” “They are going to fire us, it can’t be.” Even when it came to post-production we were able to get it done with broadcast quality. We couldn’t have done this years ago.

Maurice LaMarche: The technology is absolutely right for it now.

Jess Harnell: The timing couldn’t be better, cause people need something to laugh about, at least a little bit.

Maurice LaMarche: Welles you were going to weight in with something?

Wellesley Wild: I was just going to say from a production standpoint, animation is in a better position to adjust to that remote working environment, we had to. It was pretty seamless, besides’s Jess’s closet issues.

Rob Paulsen: Thank god he’s out of it.

Wellesley Wild: Getting to see the clothes that are in your closet…

Jess Harnell: There’s a lot of clothes in there, that’s a whole other press conference.

Maurice LaMarche: I am wondering if all the beads and metallic bits caused terrible resonance..

Rob Paulsen: You can see Jess’s wardrobe from the space station. It’s incredible.

So make sure to check out this series when it airs tomorrow, hell we might even get a “finger Prince” reference!